Types of brickwork and features of its construction 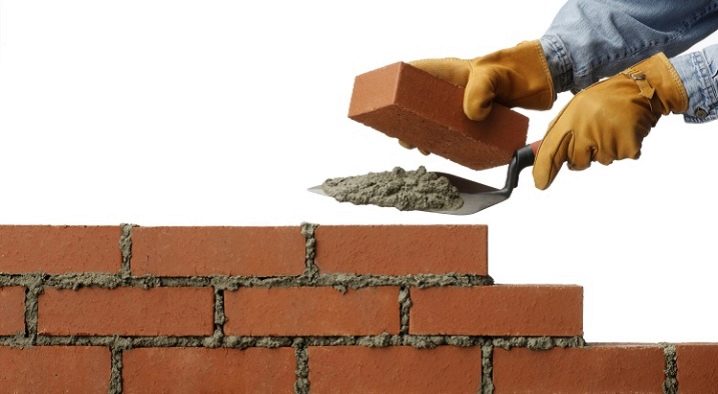 Even despite the widespread use of modern building materials, traditional brick remains highly in demand. But we must take into account the peculiarities of its application. For certain types of masonry and do need specific blocks.

Preparing for the construction of brick walls with your own hands, you must show the same accuracy, responsibility, which is peculiar to professional bricklayers. And the first step is always taking into account the specifics of the brick, its structure. The planes of this material have the names established in construction practice. These names are clearly enshrined in the state standard.So, the “bed” is usually called the largest side, which in relation to the laying can be on top or bottom.

"Bed" forms the so-called plane of the first category. Spoon builders call an elongated vertical face that can be placed inside or outside. A poke is an end, often looking towards the opposite end or out.

Only extremely rarely does it become necessary to lay the tychkovy side in some other way. Having dealt with these moments, you can proceed to the rules of laying (or, as experts call it, “cutting”).

The lines on which bricks are laid out necessarily go horizontally, while also mutually parallel. This rule is due to the fact that the brick is well tolerated by compression, but bending is bad for it. If you violate the recommendation, the bending moment can damage the individual bricks. Another basic principle: butts and spoons lead at an angle of 90 degrees both between themselves and with respect to the “bed”.

The consequences of this rule are:

Without observing the second principle, amateur builders may soon “enjoy” the view of a cracked wall. And the third principle says: the mechanical load of each brick should be distributed at least in two adjacent blocks. In addition to the three basic points, it is necessary to pay attention to the thickness of the walls being erected. Its category is determined by dividing the actual width by the width of the jabs.

It is customary to highlight the following options (in meters):

Sometimes applied laying two and a half bricks. The thickness of such walls is 0.64 m. Such constructions are justified only in the case when you need the highest security. Even thicker walls in residential construction are not used, since building them is too difficult and expensive. If the wall thickness is 1.5 bricks or more, the longitudinal joints between the adjacent stones are also taken into account in the calculations.

In addition to the types of masonry, it is also important to know what these or other names of bricks mean.Solid ceramic bricks are used to construct particularly important structures. We are talking about buildings and their elements, which should be extremely stable and stable in any circumstances, regardless of the load. But due to the weight of solid brick, it is used mainly in the construction of load-bearing walls. It is also impractical to use such blocks for finishing, for non-essential elements - they are too heavy and unduly increase the load on the foundation. 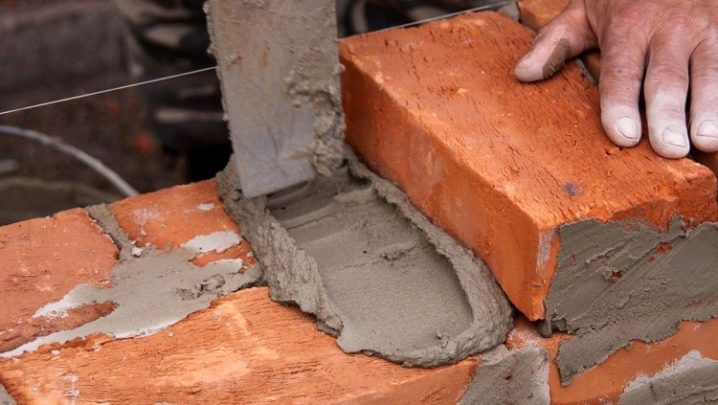 In places where the level of mechanical stresses is less, and the requirements for thermal insulation are higher, hollow ceramic bricks are widely used. Usually its carrying capacity is enough for the construction of the main walls, since in private housing construction extreme load is rarely encountered. Silicate brick can also be hollow as well as corpulent, its areas of application are the same as those of the ceramic counterpart. But along with these two species, several other types have appeared over the past decades. Thanks to modern technology, you can still use hyperpressed brick.

The main component of this material are small fragments of rocks obtained by the open method from quarries. To make them a whole, quality portland cement is used. Depending on the processing methods and ideas of technologists, a hyper-pressed brick can be ideally even or resemble a “torn stone”. But the gradation in construction concerns not only the chemical composition and technology of bricks. It is customary to sort them by purpose.

Building, it is an ordinary brick is intended for the construction of the main walls. When using it, subsequent finishing of the facade and measures for its special protection are mandatory. The facing brick, sometimes called front, surely is made without the slightest defects. Chemically, it can be very different, including hyperpressed, but the silicate lining is not used in places with high humidity.

Regardless of the specific type, bricks must have a “bed” length of 0.25 m, otherwise the simultaneous use of different types of blocks will be impossible.

Whatever the brick builders put, whatever the purpose of the structure and scope of work, special tools are needed. Traditionally used trowel: it is appreciated for the convenience of capture and precisely calculated angle. But as a trowel, and all other tools used by masons, belong to one of two groups. It is a working tool (which helps to erect the walls themselves, other structures) and used for measurement, for control. When working, bricklayers use:

To accurately measure lines, horizontals, verticals and planes, use:

After reviewing the varieties of tools used by bricklayers, with types of bricks, it is now important to see what types of brickwork.

And the first of them is a spoon series. So called stripes, where the long sidewall is adjacent to the outer surface of the wall.In addition to the spoon ones, the tychkovy rows should also be used - they look outward with the short side. In between, the so-called zabutka (additional bricks) is located. 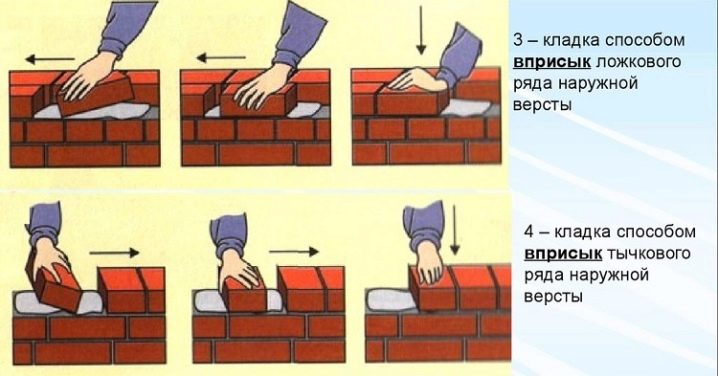 There are several subspecies of multi-row brick laying.

Multi-row display can be done differently. Tilting a little brick, gaining a solution on the tychkovy edge. This is done in 0.1-0.12 m from the previously laid block. Moving the brick into place, check that it is installed correctly and press down to the bed. Before final fixing check that the solution has filled the entire seam.

The word "ligation" masons do not mean the use of any nodes, and the layout of building stones. Inexperienced builders often ignore this moment, believing that it is only necessary to properly lay the bricks separately, “and the row itself will take shape.”Chain, it is single-row, ligation implies a strict alternation of tychkovy and spoons. This technique ensures the reliability and stability of the wall, but then it will not work to decorate with decorative brick outside.

Additional hardening is practiced in both multi-row and single-row display. It is used to create:

Depending on the direction under which the mechanical impact is applied, the reinforcement is produced vertically or horizontally. Reinforcing elements are introduced into the mortar, when he has already grabbed a little, but still retains plasticity. Determining the dominant direction of the load is very difficult.

Sometimes it is possible only by professional engineers who take into account: 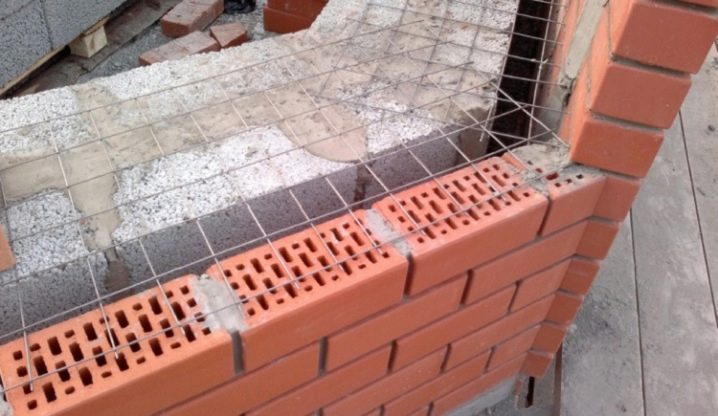 The severity of the brick forces the builders to take care not only of the strength of the structure, but also of reducing its mass. Lightweight masonry implies that the outer wall will be laid out with half a brick.The inner layer is laid in 1 or 1.5 bricks. These designs share the gap, which is calculated very carefully. Lightweight masonry, we note, is never performed by a single-row scheme - it is made only in a multi-row way. 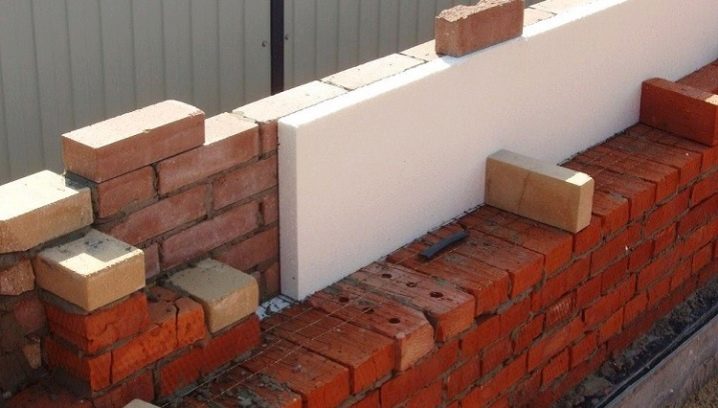 Strictly speaking, decorative masonry, as opposed to lightweight, is not a specific kind. Often it is done on the already mentioned "chain" scheme. But there is also an “English” one, it’s also a “block” method - in this case, the tychkovy and spoon rows change each other sequentially, and the joints are placed strictly along the vertical line. "Flemish" type of decorative masonry implies that the joints move 0.5 brick. When choosing the option "savage" it is necessary to change the butterflies and spoons randomly.

But besides these types, there are still options of laying, worthy of attention. Above it was already mentioned in brief about the well laying of bricks. So called in a special way three rows.

The outer wall is prepared using a pair of partitions, the thickness of each of which is 0.5 bricks or even less. Well constructions are obtained by connecting partitions with brick bridges,horizontally or vertically.

Basically, traditional bricks are put inside, and outside:

The benefit of this method is associated with the saving of expensive building material and with a decrease in the thermal conductivity of the walls. But we have to reckon with the decrease in strength and the penetration of cold air. Often the well laying is improved by erecting walls with warming with expanded clay and other substances. If you need to further increase the strength of the wall, use concrete or slag. These insulators resist mechanical deformation well, but slag can be impregnated with moisture.

The brickwork of sewer holes has its own features. Most often, red brick of increased strength is used for it. Corner blocks (lighthouses) are placed first and thoroughly aligned. In the absence of experience, it is advisable to monitor the level of all laying bricks. Trained bricklayers usually check themselves every 2 or 3 rows. Also necessarily carried out waterproofing.

Regardless of where the brick wall is placed, you need to take special care about the design of the corners.They cause the most difficulties for inexperienced and sloppy builders. On the cord, adjust the diagonals and right angles. At the very beginning, a trial (without solution) calculation is carried out. It will allow you to accurately assess where supplements are needed, how to arrange them correctly.

To complete the review of the types of masonry is appropriate to create stoves and fireplaces of brick. They are made only from fireproof full-weight ceramic blocks. Products with voids inside are obviously unsuitable. It is best to build a furnace using ready-made mixtures of clay and sand, which are sold in any specialty store. Before laying the ceramic brick is soaked for 3 minutes, and the refractory products are put dry, unless sometimes rinsing and removing dust.

Safety in the performance of work

Any brickwork should be built very carefully, with all precautions. Before construction, check the tool. Both on working parts, and on handles the smallest defects, burrs are inadmissible. Evaluate how handles are fitted, whether they are firmly held in the space provided. Such checks should be carried out at the beginning and end of each day, as well as when resuming work after any break.

Bricklayers should work only in mittens. Particular attention is paid to the correct construction of forests and the reliability of stairs. Putting tools and materials where they can interfere with the passage is prohibited. Forests are equipped with boards from boards, and if you need to direct cars on them, they prepare special rolling moves. Ladders, which climb the woods and descend from them, must have a railing.

In the next video you are waiting for the types of brickwork and features of its construction.

The dimensions of the seam in the brickwork by SNiP

Types and installation of flexible ties for brickwork

Properties of mortar for brick laying and technology of their preparation

The weight and volume of the brickwork

Masonry technology "In one and a half bricks"