Vysola on a bricklaying: why arise and how to get rid of them? 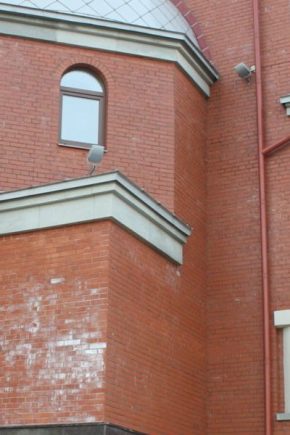 Brick houses are built seriously and for a long time zealous owners. Brick is an eco-friendly and sufficiently expensive material, so I want it to look decent for many years. The surface of the beautiful brickwork trying to keep open. Very often, growing spots of irregular whitish color appear on it. This is the so-called efflorescence. They spoil the appearance of the facade and are a kind of catalyst for the destruction of bricks.

How to deal with this phenomenon, we analyze in the article.

On the brickwork, in the first years after the houses were built, white areas can be observed, as if spattered with chalk.So under the influence of excess moisture and a number of other reasons on the surface of the brick are alkaline elements. They look very ugly, giving the facade a sloppy look. But to deal with them is necessary not only to improve the exterior of the building. The fact is that having appeared once, the efflorescences are constantly growing, occupying an increasing area. In addition, they enter the interior of the brick, contributing to its early destruction. therefore upon detection of efflorescence on the brickwork, the fight against them must begin immediatelyuntil the consequences turned into irreversible processes.

Most often, the occurrence of alkaline plaque leads to a violation of the main construction regulations by the builders. Also, the detrimental effect on ceramic bricks is exerted by incorrectly calculated features of the construction of the house, which are revealed even when living in it. However, technological disruption is not the only problem for brick house owners. The formation of efflorescence contributes to the very structure of the brick, the terrain and climate, as well as a number of other factors, which will be discussed in more detail.

Before you start the fight with an annoying phenomenon, it is worth knowing its causes. From them will depend on further steps to eliminate white plaque. The causes of efflorescence are divided into independent of the person, as well as due to his activity (in particular, violation of the technology of making bricks and the laying process).

The following factors consider the main cause of alkaline plaque on the facades.

It also happens that the efflorescence occurs because of non-compliance with the technology of manufacturing the material itself at the plant. For example, if instead of drying in a special oven, it was simply air dried.Salts in one or another quantity are contained in alumina itself, which is one of the main components in the manufacture of bricks. Its excess at low quality of raw materials, besides at disturbance of production, at the first serious moistening will lead to removal of salt to the outside.

Grayish-white bloom on the outer surface of the walls is a common and common occurrence. It occurs due to natural chemical and physical processes. Basically, the evaporation of water-soluble salts occurs with their removal to the surface. Moisture moves along the capillary structure of the brick, leaching salt behind it. Thus, at the points of emergence to the surface, water evaporates, and impurities in the form of tiny crystals accumulate in spots. 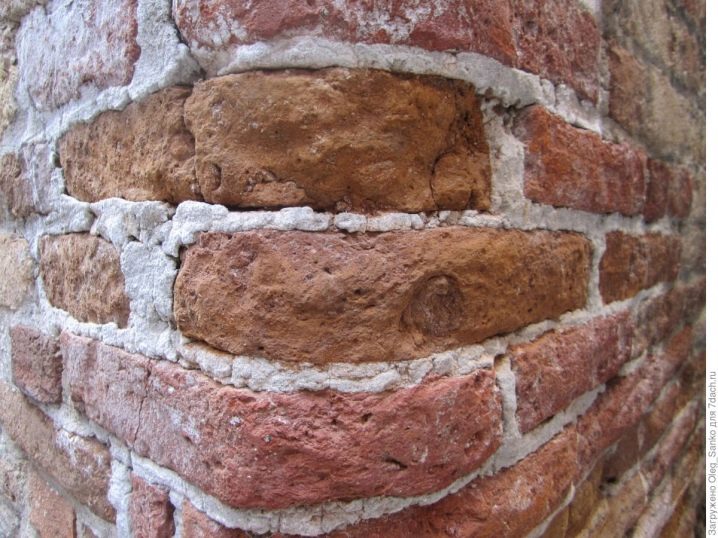 Precipitation with a high content of various impurities and harmful substances in water can also cause damage to bricks. Especially often this occurs in large industrial cities with poor ecology.

If there is a factory near the future home, you should take care to preserve the brick on the facade in good shape.

The least rare cause is improper storage conditions for bricks in the cold rainy season without protection right on the ground.Also, moisture can get from the soil, but this is possible only with poorly executed waterproofing of the base layer.

If the efflorescence appeared on the wall, you can remove them with your own hands. To do this, you can use ready-made solutions of acids sold in stores, or try to remove white bloom with folk remedies. High-quality cleaning is carried out in several stages. It is necessary to comply with the technology of correct disposal of plaque, then he will not return to the walls again.

First elimination of the largest particles is carried out by mechanical action. To do this, you need a hard brush with metal bristles and plain water, preferably clean, with no impurities. This process is rather laborious and takes a lot of time. But with due diligence, the effect becomes noticeable immediately.

Then choose a special tool for cleaning from efflorescence. Alkalis are affected by acids contained in ready-made solutions. It is advisable to find out the composition and chemical nature of the spots themselves in order to find the most effective means. Since in most cases it is not possible to do this, it is necessary to select a method by sampling in order to get rid of the ugly plaque as effectively as possible.

For testing, the remover is often used first on the test site, after which they wait for the result. Sometimes you have to experiment to select a tool, so you should not immediately buy a large container, if there is no confidence in its effectiveness. It is necessary to work with personal protective equipment, since most of the products contain fairly strong acids and surfactants.

In some cases, it is permissible to prepare your solution at home. To do this, dilute 20 grams of hydrochloric acid, a couple of tablespoons of vinegar and 50 grams of detergent per 10 liters of water (liquid soap or dishwasher foam will do). Apply the composition is usually a brush with artificial bristles or roller. If the surface to be treated is large, you can use a spray bottle or conventional garden sprayers. The brick should be well saturated with cleaning agent..

If you choose a ready-made tool, then you should strictly follow the instructions attached to it. The time it takes to clean the brickwork is usually on the packaging. Work is done using gloves, goggles and sometimes a respirator,as in the composition of the means of this kind there are acids in various concentrations.

After the brick has been cleared of traces of efflorescence, it should be rinsed. A small surface can be worked out manually.

Large areas are washed with water from a conventional watering hose or use a mini car wash. 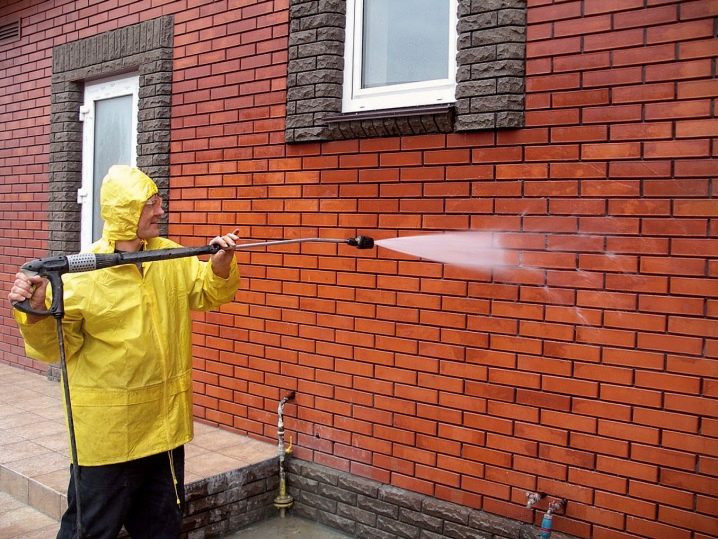 Washed this way the surface should dry well. It may take up to one and a half days to do this.. After that, in order to remove such a problem forever from the walls of the room, they are covered with a special compound, often based on acrylic components. Such a tool simply repels water, preventing it from penetrating into the pores of a brick. In addition, impregnation additionally protects the masonry from dirt and dust, which simply can not settle on it. The surface always looks clean and shiny, which looks very attractive.

From simple tools that are always at hand, we can recommend an inexpensive way to bring white bloom from a small area. Cleans his usual lactic alcohol. A standard bottle of this liquid is diluted in 10-12 liters of pure water. If desired, the concentration can be slightly increased by taking a smaller volume of water. Apply the product with a spray with a fine spray.

Sometimes, even with the proper conduct of all cleaning measures, plaque reappears. The point here is not in poor-quality processing, but in the structure of the material itself. Any brick and mortar contain alkaline compounds that are impossible and do not need to be completely removed. The peculiarity of organic building materials lies precisely in the inclusion of such elements in their composition. External treatment washes away the efflorescence only for a while. If a large amount of moisture gets on the masonry, after a while the treatment will have to be carried out again.

To avoid a repetition of ongoing cleaning activities, the surface exposed to significant weathering or water ingress must be protected from moisture. At the same time requirements for vapor permeability are imposed on it.

It is much easier to prevent the appearance of efflorescence than to fight with them. After all, they arise quite quickly and increase their localization. Work on their removal can take a lot of time, effort and money. In addition, there is no guarantee that white spots will not appear again after cleaning.Therefore, we determine in advance the possible factors that can spoil the brickwork.

It should be laid as carefully as possible, leaving no traces of mortar on the facade.If brick contamination does happen, clean it as soon as possible. After that, a special hydrophobic substance that is able to repel moisture from mineral surfaces is applied to the surface of the masonry, well soaking the brick.

The formation of efflorescence is often a natural and unavoidable process. It is not always possible to control its appearance. But as far as possible it is necessary to create conditions for adherence to the correct laying technology, then many problems can be avoided.

How to remove the efflorescence, see the next video.

The design of the house facing brick

Ordinary brick: what is it and what characteristics are different?

How to make a machine and make a cinder block?

Slag stones: standard sizes and area of ​​use

Features and use of clinker brick for interior decoration

Characteristics and use of brick brand M-150

How many bricks are there in a pallet?
Information provided for reference purposes. For construction issues, always consult a specialist.