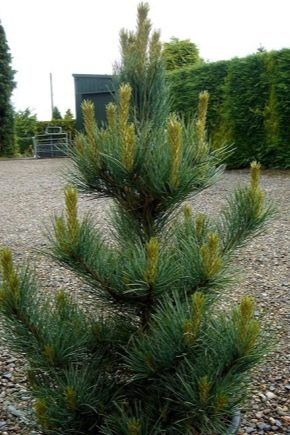 Mountain pine is a very popular ornamental plant and occupies a leading position in the formation of landscape design. A large variety of varieties and forms allow you to use it in the design of any style of planning of the area.

Mountain pine is a coniferous evergreen plant of the pine family, having a strong root system and a vertical taproot extending deep down.

Needle needles grow in bundles of two to five pieces, the crown has high branching, and the bark is prone to flaking.

The height of tall specimens is 3-4 meters, which is significantly less than the height of other types of pines.For example, the black pine “Fastygiata”, also used in the formation of landscape design, has a height of 7-8 meters with a crown diameter of three meters, and the height of Scots pine sometimes reaches fifty meters.

Shrub species of mountain pine grow to two meters, and creeping and dwarf species have a height not exceeding one meter. The crown of the plant can be openwork, spreading, umbrella-shaped, pyramidal and ovoid-dulled. The habitat of mountain pine is in southern and central Europe.

Mountain pine perfectly complements any decorative combination due to the following advantages:

The disadvantages of the species include intolerance to increased air pollution and excessive shading of the terrain.

In the design of landscape design, several varieties are used, differing in size, shape of the crown and cones, as well as in the appearance of the needles. 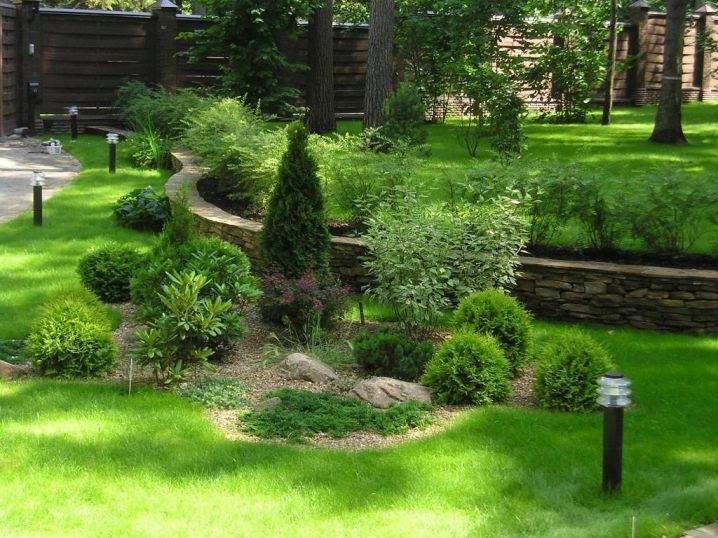 This variety is represented by ornamental shrubs with a dense spherical crown. Height of an adult plant can reach one and a half meters. Differences in the length of young and old needles create an unusual effect: the crown looks fluffy and well-dressed.

Due to the high drought tolerance, trees of this variety are often used to design the rocky slope and a large alpine slide.

It is a shrub reaching a height of one meter, and has a chic spherical crown.

Very spectacular plant, acquiring a golden hue in the autumn period and giving the space a festive look.In winter, the shrub becomes the center of the landscape composition and noticeably transforms the dull look of the cold season, and small dark brown cones add aesthetics and piquancy to the tree.

In the summer, the needles have a rich emerald hue and give the landscape combination an elegant look. Often used to compose coniferous compositions, when making rockeries and as a hedge.

The plant is wind-resistant and harmoniously combined with heather and evergreen rocks.

It is represented by a slowly growing shrub, which in forty years grows to a two-meter height and does not require constant monitoring of the crown shape and its regular correction.

The needles have a dark green color and are distinguished by their ability to shine and sparkle in the sun. This gives the tree a festive look and visibly animates the landscape.

Gnom perfectly combines with stony structures and can be planted in rockeries, rock gardens, conifer mixborders, as well as on loggias and open terraces. This variety is considered the most resistant to the influence of aggressive external environment and heavy snow cover.

It has a cone-shaped crown and twisted curved needles, which gives the branches a solemn and elegant look. During the flowering period, the anthers of the male inflorescences acquire a bright yellow shade, which makes the tree elegant and unusual. 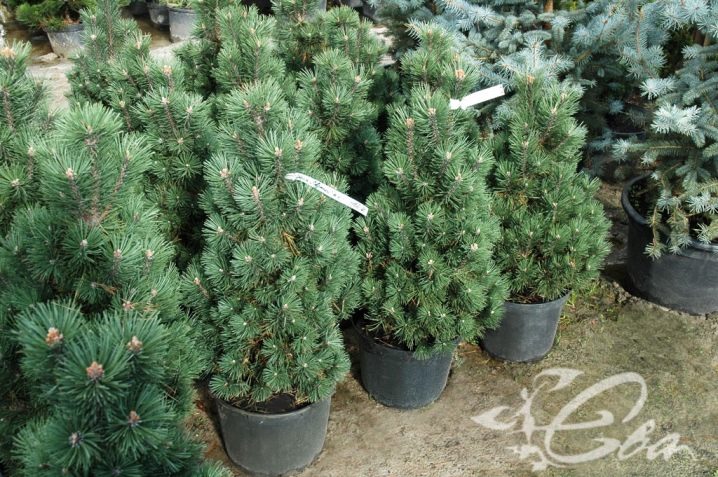 This variety does not tolerate darkened spaces and is not recommended for planting in hot and arid climatic zones. It belongs to slow-growing species and reaches a three-meter height over several decades.

Pine shears well and can be used both as a single-planted element and in group compositions.

It has a thick crown in the shape of a hemisphere and blends harmoniously into the garden design. Plants are frost-resistant, but they can not stand the shadow at all. Planted in open and well-lit areas.

The needles have a dark green color, on which a bluish raid is clearly visible. Due to the stability of the crown, the tree does not require painstaking and complex trimming.

It can be used for decoration of rock gardens and gardens.

It is a creeping semi-dwarf pine and is widely used in the formation of borders and hedges. Looks harmoniously both in the composition of conifer mix mixers and mixed group combinations.

Well revives the landscape and perfectly withstand heavy snow cover. An adult tree has dark brown miniature bumps and is often used in the design of rock gardens. Plants of this variety need additional watering and do not tolerate shade.

It is a dwarf shrub plant. It has a very lush crown, acquiring a bright yellow shade in the winter, and effectively shading other evergreen conifer trees

The maximum growth of the tree is 80 centimeters, the plant is very sensitive to the pollution of the urban air and is more suitable for the decoration of suburban areas.

It is a low shrub with a maximum height of one and a half meters and a rich spreading crown.

It cuts well and is ideal for decorating mixed compositions with the presence of deciduous plants. "Pumilio" has a stiff short needles, which grows in the form of a dome and has a very unusual appearance.

It is the lowest species of mountain pine. An adult plant barely reaches a height of fifty centimeters.The bright green crown has a regular hemispherical shape and is ideally suited for the formation of a border and in the design of rock gardens.

This grafted mountain pine on the shtambe is very popular for the design of the garden in the Japanese style, as well as for the formation of the alpine mountain ecosystem.

The plant is as follows: on a long and thin trunk is a spherical crown of the correct form, with fluffy, dark green needles.

The size of this dwarf tree does not exceed 30 centimeters. The plant is considered slowly growing and adds only three centimeters per year.

For planting, it is recommended to use loamy soils or acidic soils.

The tree is unpretentious and often used for decoration of the premises.

Mountain pine is an important element in landscape design. Due to the variety of varieties and shades, the plant can be both a central figure, around which the composition is composed, and act as an organic addition to the previously formed combination.

The classic combination of conifers, deciduous and heather species will transform any area and will not require large expenditures. 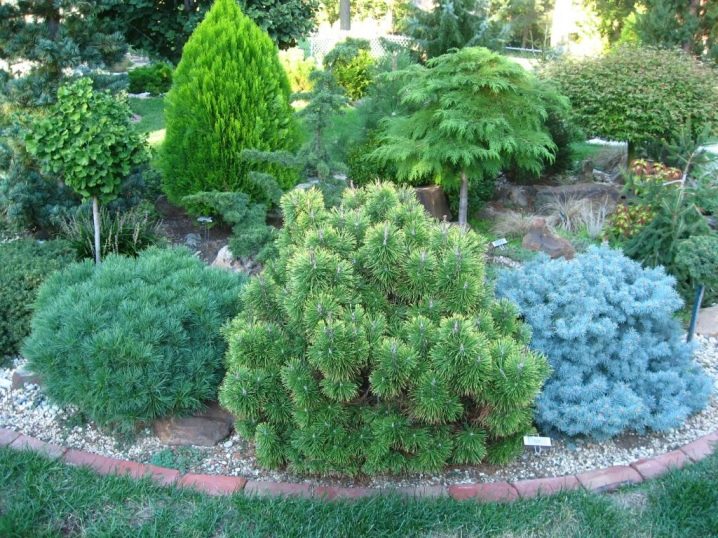 Conifer Mixborder: the fluffy crown of a mountain pine acts as a secondary element of the composition and emphasizes the severity of the elegant spruce forms. 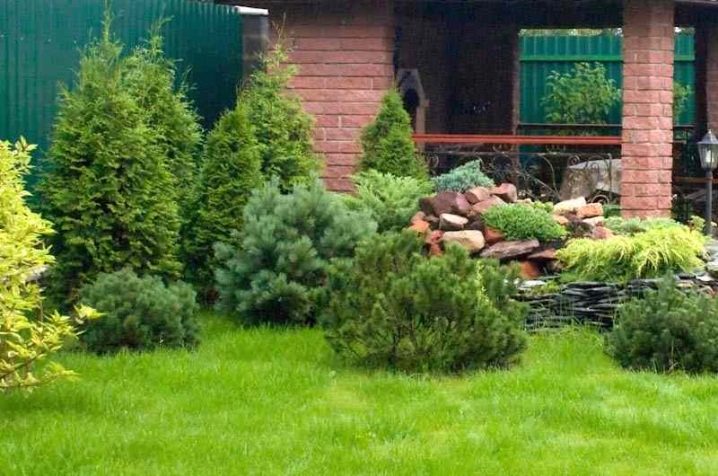 Harmony of stones and needles diversifies the landscape and makes a stylish dacha. 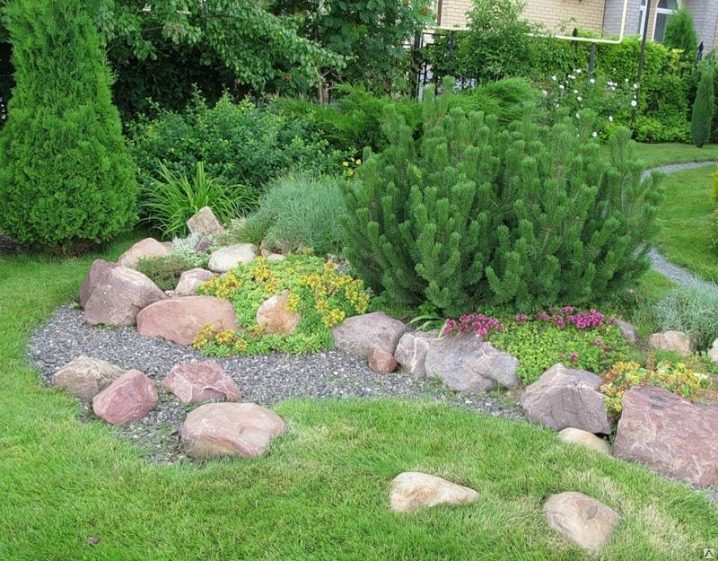 Mountain pine in the form of a single landing at registration of rock garden will be the center of attention and decorate the terrain. 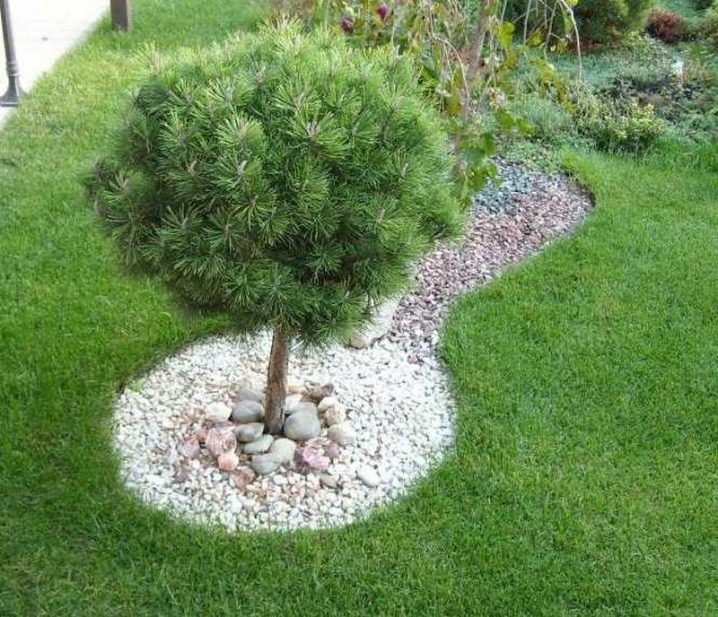 The proximity to the large-flowered plants will give the composition an elegant and romantic look. 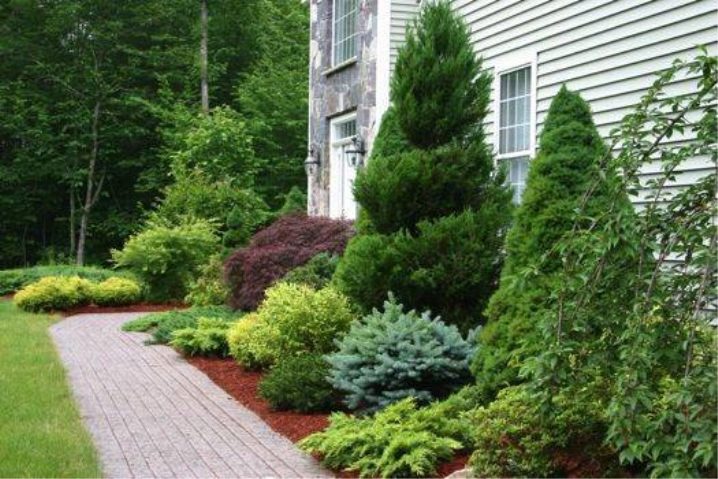 Mountain pine is the perfect solution for creating style. Bonsai. 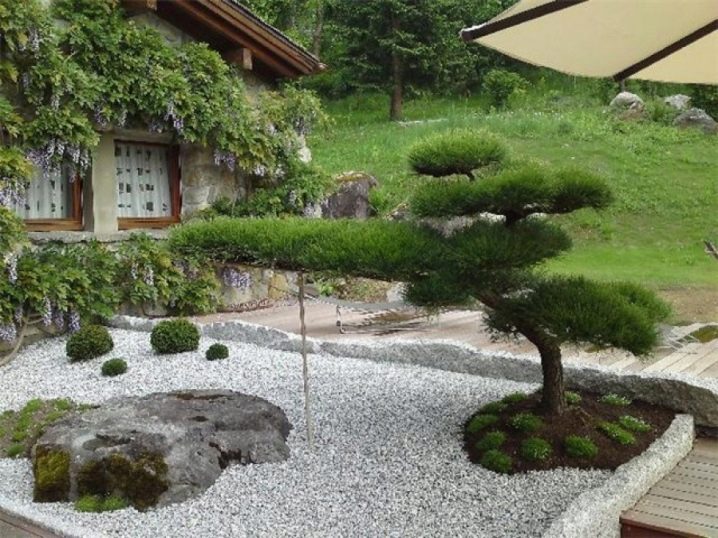 A tree with a pyramidal crown is perfect for lawn design. 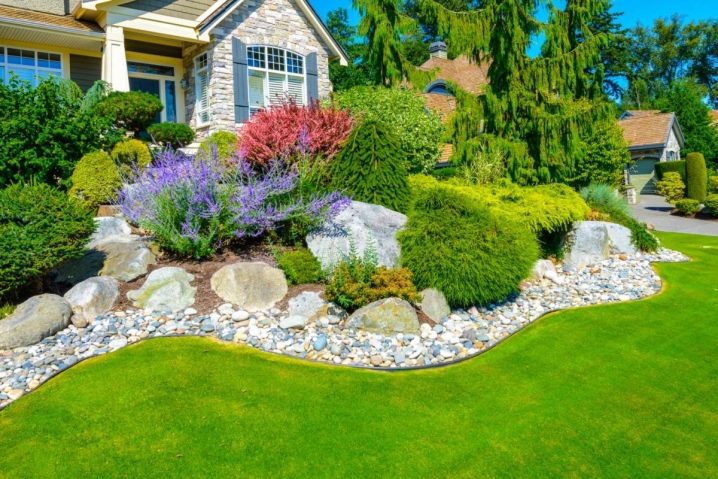 Mountain pine is a universal element of landscape design. The plant does not adversely affect other species. It can be planted both in classical garden spaces, and in exclusive compositions.

This pine is quite unpretentious in the care and has a beneficial effect on the body.

To learn how to plant a mountain pine and how to care for it, see the next video.

Use thuya in landscape design

Features of landscape design of a small garden

How to make a lawn with your own hands: installation features
Information provided for reference purposes. For construction issues, always consult a specialist.