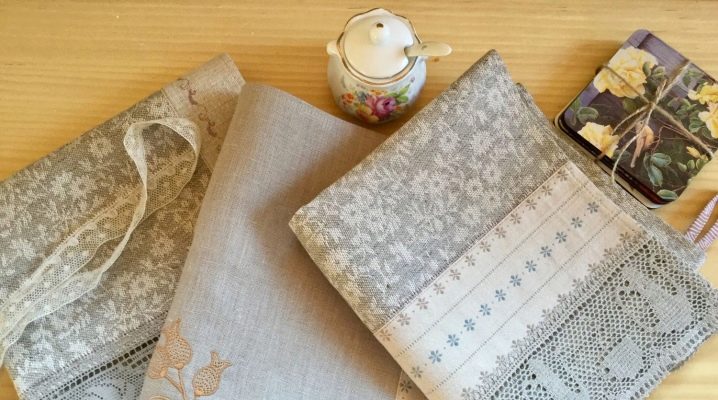 Lyon, very common a few decades ago, is experiencing a rise in popularity today. Increasingly, residents of large cities are striving not only for convenience, but also for naturalness, as a result of which they choose such fabrics for both clothing and household items. Linen towels for the kitchen and bathroom are pleasant to use and fit almost any interior. A variety of shapes and colors will allow you to choose the right set even for the brightest bathroom or kitchen.

The benefits of linen

Flax is a plant that is grown and harvested in a special way in order to obtain natural fiber. The ripened stem is not torn off or cut, but is gently pulled out of the ground. This allows you to keep the length of the fiber maximum, facilitates the process of its separation.

From ancient times in Russia, homemade cloths on special machines were made of linen yarn by hand. Today it is carried out on special equipment using the “wet spinning” technology. Machine production allows not only to increase the speed and scale of production, but also to make the surface of linen fabric more smooth and soft.

In addition to its naturalness, linen towel has several other advantages.

The towel is a subject for daily use. It is actively used, resulting in rapid wear of the fabric. Linen thread is stronger than cotton, and its weaving in the canvas is more dense.

This allows you to keep the fabric pristine look longer and remain soft.

Natural fiber perfectly absorbs moisture, which is especially important for large bath towels, which wipe not only the body, but also the hair.

The linen towel is thinner than the others. Due to this, it dries faster and is ready for new use. 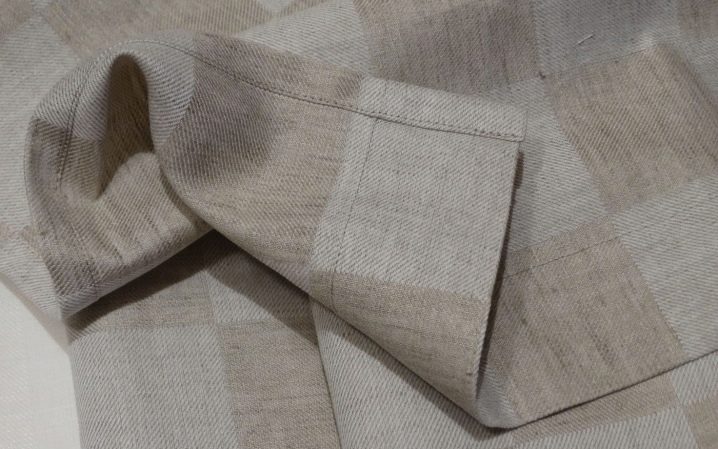 Sensitive skin in contact with synthetic tissues may react with irritation and peeling.

With natural flax, such a reaction does not threaten even tiny babies. 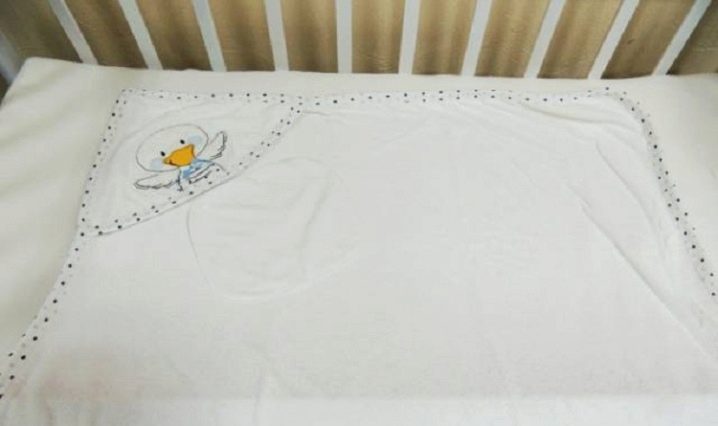 Does not accumulate static electricity

When rubbing synthetic fibers against human skin and hair, small electrical sparks can occur. Natural flax does not accumulate electricity, and does not magnetize hair.

Those who are concerned about the environmental situation of our country and the planet as a whole will appreciate the process of producing flax linen.

Unlike other fabrics, flax requires less water and virtually eliminates the use of chemicals in production. 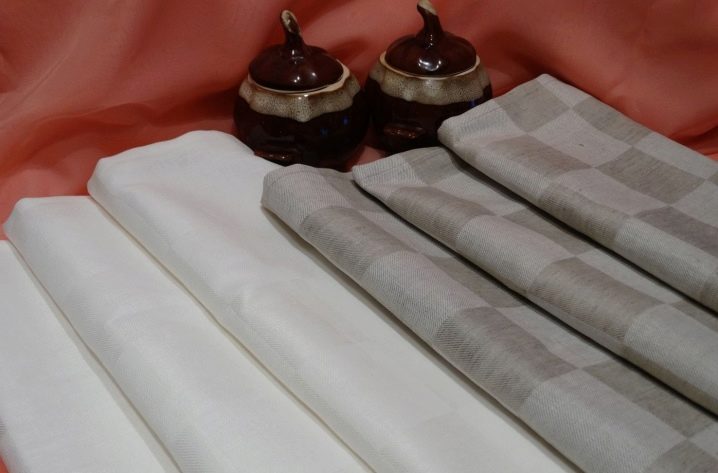 Depending on the size and use of towels can be divided into bath and kitchen. The former are much larger and are used for the whole body, and the latter are needed for kitchen operations. They can wipe dishes and hands, take a hot pan, wrapping it in such a cloth, wipe the water drops on the kitchen table. Depending on how the linen was made, there are several varieties of such towels.

Fabric for them is made of yarn dyed before weaving.

Most often it is plain canvas pastel soft colors.

The threads of the canvas are intertwined in one way or another, due to which a unique pattern or volume pattern is created.Most often in the kitchens can be found such checkered towels, which are called "waffle". 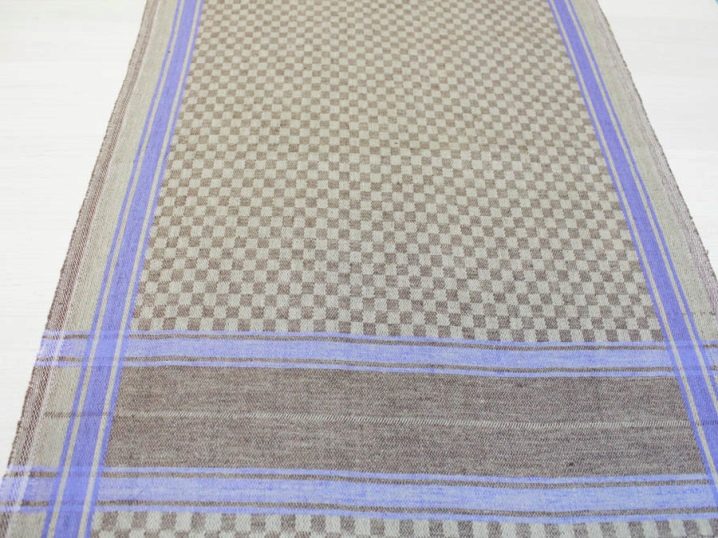 Color or pattern is applied after the threads have been woven into a single canvas or even on the finished product. The colors of such towels are brighter, and the drawings have high clarity.

However, such an application has one major disadvantage; it is quickly erased with frequent use of the product.

How to care for flax?

Bathroom and kitchen are considered rooms with high humidity. In addition, the towels themselves are often in contact with various detergents and cleaners. All this led to the emergence of some features for the care and storage of products from natural fabrics.

It is necessary to choose the right product, which will be cleaned towels when washing. It should remove even fat stains without a trace and at the same time not destroy the very structure of flaxen threads. It is best to choose powders or gels for washing without bleach in the composition. At the same time linen towels can be washed both manually and using a washing machine.

No need to use too hot water, 40 degrees will be quite enough. 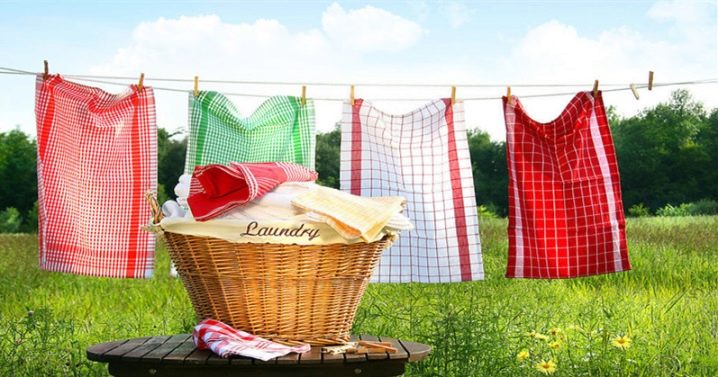 Do not strongly pull and twist the towels, squeezing them after washing. Flax is best not to squeeze, as it changes and deforms the weaving of the canvas. In the case of machine wash, you can spin the spin at minimum speed or, if the model allows, turn off the spin completely. Drying flax is best in the open air or on a warm battery. Before you hang a wet towel, you can shake it well. This will help reduce the number of folds on a dry product.

Ironing linen fabric should be at a temperature not exceeding 200 degrees. It is best not to use an iron, but a special steamer. Hot towels are best laid out on a bed or couch and let them cool slightly before you roll them up and put them in the closet. This will reduce the creases that appear in the folds of the linen towel.

The role of products in the interior

Linen fabric looks best in the interior, in which there are other natural materials and design. These include: wall or window decor; furniture upholstery or tiles in the form of natural stone. The easiest way is to combine the cloth of towels with another cloth, for example, with curtains on the window or a curtain for the shower.It will look great set of bath towels, hung or laid out in the bathroom, the same color as the plumbing or pattern on the ceramic tile.

The kitchen corner can be decorated with small pillows, pillowcases that will be sewn from the same fabric as kitchen towels.

Linen lampshades look great on a chandelier in the kitchen, if they match in color or pattern with small hanging towels.

It is best to buy and lay out several towels of the same color or pattern at once, since a single piece of fabric looks less attractive. For each product has its own place, it is not only beautiful, but also very convenient. You should not use those towels that are already worn, torn and have lost their visual appeal. A new product is not so expensive, and a cozy home environment is able to cheer up even on the most overcast and rainy day.

See the following video for tips on caring for flax.

Features of the choice of children's towels

How beautiful to fold a towel?