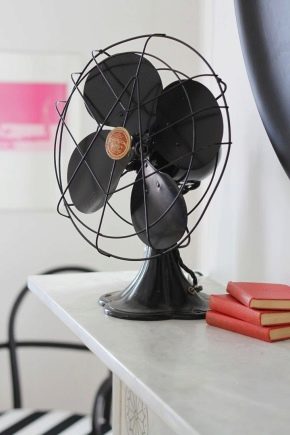 The modern market of household appliances is filled with various air-cooling devices, the most popular of which are desktop fans, which are notable for their minimal noise level and wide functionality. When choosing such devices, you need to familiarize yourself with their positive and negative features.

Table fans - devices for creating a comfortable microclimate in the room. Modern models have a speed selector, blade rotation and angle of inclination. Tabletop fans can be adjusted to blow a specific area.All devices are quite compact and easy to operate. There are devices that are executed in the original style decision. Due to this, the room becomes more interesting and colorful. Design features of desktop devices:

Fans for the house are of high performance and are designed to cool the air. The principle of operation of such devices is as follows: electric current flows into the engine of the apparatus, due to which the blades begin to rotate, creating air currents. The zone where the fan is directed begins to cool gradually.

Like any household appliances, fans are classified depending on the design features and the type of working body.

The most popular options for air cooling devices. The basis of the device is the movement of air flow along its axis. Of all the modern models, this is the simplest device. Due to the simplicity of execution, low price and good technical parameters, axial fans gained wide popularity among customers. Used not only for domestic purposes, but also in the industrial segment. Models with small and maximum power are produced, providing a high pressure of air masses.

They are distinguished by high performance, since the blades of the device on the clothespin provide minimal air resistance. This ensures low consumption of electrical energy during the rapid rotation of the blades.

Such fan models work due to the formation of centrifugal force. The principle of operation is as follows: air enters the rotor, from where, as a result of centrifugal force, it acquires a certain speed. Most often, such devices for ventilation are used in the industrial segment, but compact and powerful models for domestic needs are also produced. The main advantage of such devices should be considered their large load on the flow of air masses. The downside of centrifugal fans is the complexity of the design.

Such devices are considered the second most popular fans for air cooling. Designed for installation in the supply and exhaust ventilation circuits. The principle of operation includes the two previous principles described fans.

The main advantage of such devices - the efficiency reaches 80%, small size, metal performance and silent operation.

These devices for ventilation with a turbine began to be produced quite recently. Their main feature is the presence of an air accelerator, which is able to accelerate the flow of up to 20 times.It works on the principle of aerodynamic effect, that is, the fan frame increases the amount of air coming from the turbine due to the capture of additional air molecules from the outside. The negative characteristics of the blameless models include the high cost and the formation of noise during operation. However, the positive features of the devices fully justify the disadvantages: minimum consumption of electric energy, modern fashionable design, uniform air supply, regulation of modes through the control panel and ease of operation.

Basically, turbine-free fans with a turbine are designed for use at home and in offices.

Choose the best device for ventilation at home, based on the popularity of the brand. Thanks to this, it is possible to purchase a truly high-quality product from a world famous manufacturer. By paying a little more money for the promoted brand, the buyer receives an excellent guarantee with the possibility of repair in certified centers.

When buying cheaper devices, there is a high probability of a poor-quality fan.However, many modern manufacturers with less popular names are trying to produce good devices, so cheapness is not always a sign of poor quality. Whatever the manufacturer, the fan should be purchased in accordance with the technical parameters of the device.

Criteria, which must comply with modern devices for ventilation. 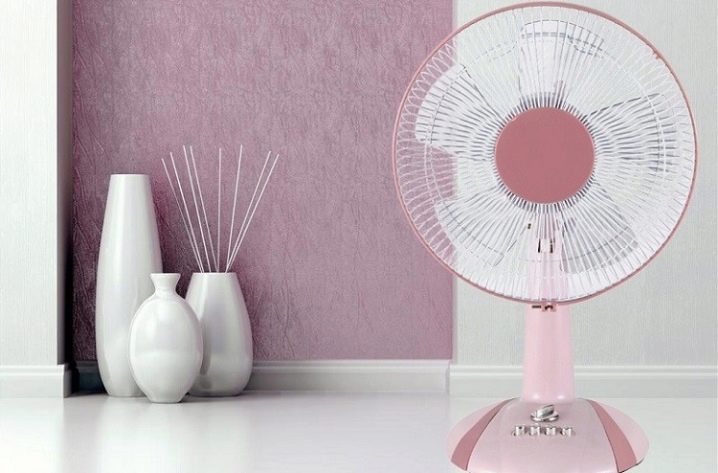 When choosing a desktop fan, you must rely on all the above basic criteria. However, this is not a complete list. For many modern devices are characterized by additional features that make the fans as convenient as possible to use.

The most prestigious fan models are robotic mechanisms. The cost of such equipment is very high and not affordable for all buyers. For the average consumer, a fan with a standard set of options is also suitable. The main thing is that the table fan regularly performs its function. And what fans should not buy? Light desktop instruments are considered less stable and can often fall as the tool rotates. Also, you should not choose very cheap models, many of them will soon fail.

It is recommended to stop the choice on popular brands.

Model of average power 35 watts. Equipped with a mechanical control unit. Hong Kong manufacturer gives a guarantee for their products for 12 months. According to customer reviews, the following positive features of the devices were revealed:

Model 30 W, made of steel. Externally, it looks prestigious and fashionable. When touched, it leaves traces on its surface. It works steadily due to its large weight. Produced by the German manufacturer, the warranty period is 12 months. According to consumer reviews, this table fan has the following advantages:

Disadvantages of the device:

Produced by a company specializing in the manufacture of cooling devices. It has a power of 35 W, the presence of 5 blades provides uniform air cooling. Equipped with a handle for movement. The control is mechanical, the number of speeds is 2. It is produced by a Spanish company, the warranty period is 12 months. Consumers have identified the following positive aspects of fans:

The desktop device with overall dimensions, different original and modern design. In the configuration of the device there are three impellers. They are made from soft materials to ensure safety. The special production technology provided a blowout of clean air mass free of dust and dirt.Ease of operation is provided by the autonomous operation of the equipment using a battery, that is, without connecting to the network. This allows you to operate almost silently, with an average power with low energy consumption. Positive features of the equipment:

Low cost desktop cooling unit with a low power of 25 W is designed for computer and coffee tables. In this case, the functionality of the capabilities is small: there are only two speeds, the head can be tilted only at a right angle. Produced in Hong Kong, the warranty period is 12 months. According to consumers, the Maxwell MW-3547 tabletop fan has the following positive features:

Desktop machine with great functionality, you can even install it on the wall. The advantages include:

Disadvantages of the device:

In the next video you will find a review of the desktop fan AEG VL 5528.

Varieties and features of the choice of the fan on batteries

Fans with air humidifier: a device, an overview of models and tips on choosing

USB fan: what is it and how to do it yourself?

Kinds and principle of operation of flawless fans

Features and tips for choosing floor fans with control panel