How to process a brick and how to do it? 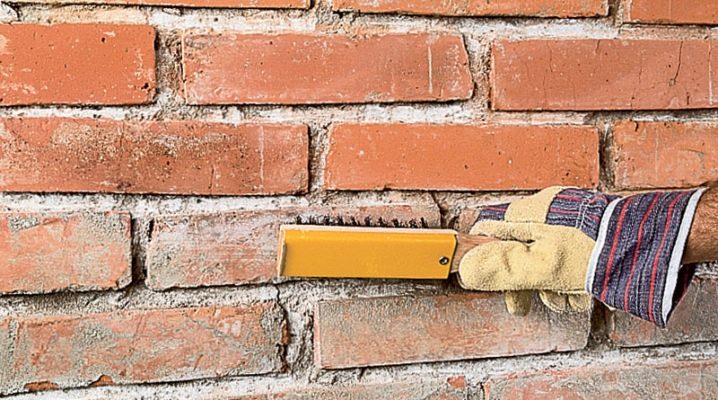 A brick is a porous material, and therefore, when moisture enters its structure, it destroys the masonry from the inside.

Special means for processing bricks provide additional protection from external influences and moisture. Such processing is needed to increase the service life of structures that are laid out of brick. It will also help avoid cracks, fungal deposits and degradation of the structure. The compounds penetrate into the brick and activate the reaction against mold and dampness there.

What is the treatment?

The weakest point in the laying is seams. It is through them that the moisture penetrates inside, and during frosts the water freezes. There, it expands and acts on the bricks, causing the material to collapse.Also, some types of bricks can absorb moisture through the pores, which does not have time to dry and remains inside, as a result of which micro cracks and chips appear, which also leads to destruction. To protect the brick from corrosion, experts recommend treating it with special compounds and carrying out water repellency.

The usual protective composition consists of iron oxide, purified water and binding components that can penetrate into the silicate and enhance its properties. Potassium silicate acts as a binder in such a liquid and can interact with salts. It helps to improve the protective properties of ceramic products, protects them from UV exposure and mold. Also, protective compounds improve the appearance and color of bricks.

The compositions increase the resistance of the wall to frost and eliminate the possibility of chipping or cracking on them. At the same time the stone does not lose vapor permeability.

Impregnation makes it possible to protect the base from moisture and does not allow it to penetrate into porous structures. When processing the material in such a composition, a film is formed on it, which prevents fungus and mold from developing.

The disadvantages include the fact that such mixtures are expensive, and also have to be applied periodically to the surface, which will require additional time and cost.

Penetrating waterproofing is of several types, among which are the following:

Biocidal impregnation for brickwork and processing of the facade of houses is of various kinds.

The so-called wet-effect waterproofing glass consists of silicone, which not only prevents water from penetrating walls, but also protects against contamination, with the result that the surface is easily cleaned from formations and becomes brighter.After processing the walls in such a composition, they acquire resistance to moisture, they receive the effect of a wet stone. A treated wall will always look fresh and hydrated, but in fact it will always be clean and dry.

Currently, such protection against the ingress of water is considered the most popular.

This composition is made on the basis of oil from the German concern. The mixture after application does not leave stains, and also does not impair the vapor conductivity of the material, as a result of which moisture is naturally removed from it, which protects it from mold and mildew. Therefore, the composition does not allow penetration into the walls of moisture, improves the color and brightness of the finish.

Such impregnation is used both for the basement, walls in the bath, and for the foundation.

They help protect the walls from moisture, strengthen them and are used to prevent the occurrence of bacteria and insects in the clutch. The solution is mixed with water and applied to objects by spraying. It can also be added to building mixtures during the construction of the object.

The service life of the composition is 10 years, after which it is necessary to repeat the procedure.

The mixture from the German manufacturer improves the water-repellent properties of the brickwork, is durable and of high quality. Also prevents the formation of dust and dirt on concrete surfaces. The product dries quickly and forms a transparent film. 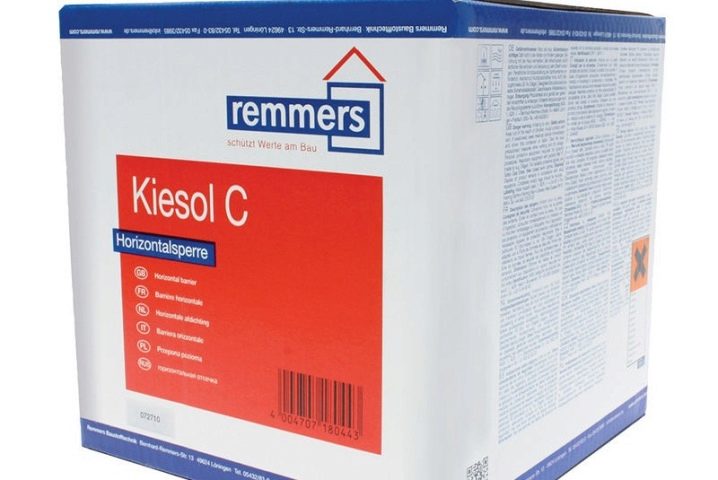 Gives the opportunity to protect the object from all kinds of negative factors. Prevents corrosion of the silicate base, increases the service life of structures and prevents their rapid wear. Also protects against industrial pollution and ultraviolet radiation, can be applied to stone, concrete, cement and other surfaces.

If it is not possible to buy such tools in the store, you can prepare them yourself. To do this, take the vegetable oil and heat it on the fire, adding linseed oil. Processing of such compounds is also carried out in two layers, each of which must dry at least two days. If you properly prepare such mixtures, they are not inferior in quality to the factory ones, but the only drawback is that they will dry longer.

It is necessary to start work on a warm day.If the walls already have damage, then they need to be repaired. To do this, you can use special tools.

In some moments, a brick wall will need to be protected from efflorescence, which appear after a certain time on the surface of the brick. Such white stains not only spoil the appearance of the structure, but also indicate a slow destruction of the mortar and the masonry material itself in the wall. To protect against efflorescence, various preparations are used, which differ in their composition, but before applying it is also necessary to prepare the surface.

When the first plaque appears on the wall, it must be quickly eliminated, since in the future mold may appear on those places. In this case, it is also effective to use water repellents based on silicon. These compounds are used frequently and at the construction stage, adding them to the solution, which increases the resistance of the laying to frost and improves its characteristics.

Sold all these funds in banks. One liter of the composition is enough for 150 square meters of the base. To do this, it is only necessary to dilute the composition in water in accordance with the instructions and apply to the dry cavity. 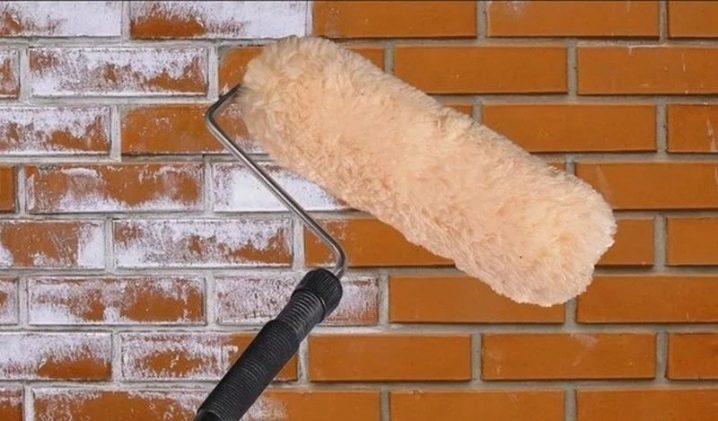 The walls can be pre-degreased and treated with antiseptics. Work can be done independently, as it does not cause difficulties. Impregnation is applied with a thin layer to the surface and allowed to dry for 10-15 minutes. If necessary, repeat the procedure. Serve such protection may be up to 10 years.

The wind can also be a factor in masonry destruction, which will blow out mortar and destroy bricks. Such destruction does not occur immediately, but can last for decades. High buildings are usually affected by wind, where there are air currents that vary in temperature.

It is the temperature drops that can cause the rapid destruction of the masonry, and therefore it is necessary to process the surface. Water repellents are also used for this, which improve the characteristics of the wall and prevent it from collapsing. For surface treatment using the above means it is necessary to stock up on materials and tools, including:

The more efficiently the masonry will be protected from external negative factors, the longer the structure will last.All factors affecting the wall have a negative effect on it, and therefore it is not worth delaying with the treatment process. It is necessary to make such procedures immediately after the house is built.. After reaching the surface, the reinforcing solutions penetrate the material to a depth of 2 cm and form a thin protective layer there. It prevents parts of the brickwork from splitting off and prevents water from penetrating inside, forming a crust.

The protective layer can withstand nitrogen, nitrates and other components, and also does not allow to form on the surface of dirt or dust. Means effectively works at a temperature from minus 60 to plus 200 degrees. The solution does not leave behind an unpleasant smell and is safe for nature or man. Such mixtures are removed from the surface with the help of their rough processing.

Another way to protect against damage is to seal the seams. This gives the wall not only a finished look after the laying of bricks, but also prevents the possibility of moisture and other negative components getting into the seams.

After the grouting of joints, it is recommended that these places be further treated with water-repellent mixtures, which can be bought in the store or used for this purpose the usual sealant.

To cover a brick wall with any formulations to protect against moisture, you need to prepare. Each brick can be impregnated, but if there is not enough time for this, sprayers can be used. All work is carried out in a certain sequence:

The surface of the silicate brick must be processed twice and at the same time apply a small amount of the composition so that no smudges occur. All work is done in protective equipment outside the buildings. If the compounds get on the skin, they should be washed with water.

Applying a water repellent to a brick, see the following video.

Expanded clay and its fractions

How to choose the equipment for the production of "Lego" bricks?

Advantages and disadvantages of building a house of Lego bricks

Brazier from a brick with his own hands

How much cement is needed per cube of concrete?