Hyper-pressed bricks: features and recommendations for use 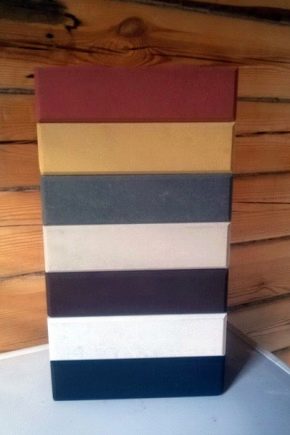 Hyper pressed brick is a versatile building and finishing material and is widely used for the erection of buildings, cladding facades and finishing small architectural forms. The material appeared on the market at the end of the last century and almost immediately became very popular and popular. 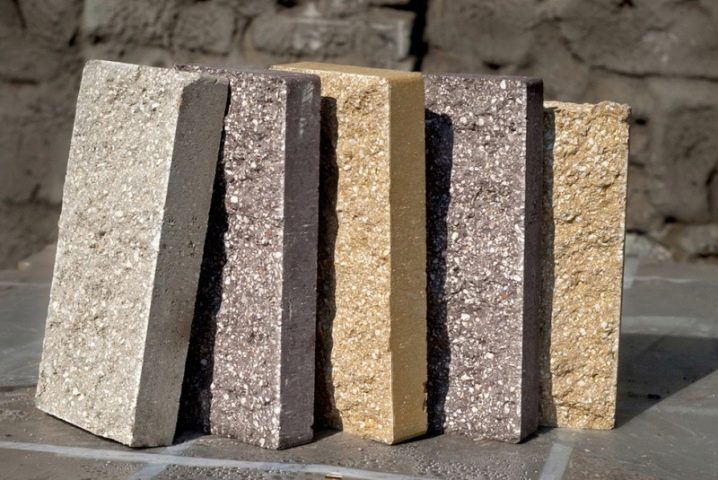 Hyper pressed brick is an artificial stone, for the manufacture of which granite sifting, shell rock, water and cement are used. Cement in such compositions acts as a binder, and its share in relation to the total mass is usually at least 15%.Mining waste and blast furnace slag can also be used as raw materials. The color of the products depends on which of these components will be used. Thus, the elimination of granite gives a gray tint, and the presence of shell rock paints a brick in a yellowish-brown tone.

According to its operational characteristics, the material has quite similarities with concrete and is distinguished by high strength and resistance to aggressive environmental influences. In terms of reliability and durability, pressed brick is in no way inferior to clinker models and can be used as the main building material in the construction of capital walls. Visually, it is somewhat reminiscent of natural stone, making it widely used in the design of facades of buildings and fences. In addition, cement mortar is able to mix well with various pigments and dyes, which allows you to produce bricks in a wide color range and use it as a decorative lining.

The main characteristics of the hyper-pressed brick, which determine its working qualities, are density, thermal conductivity, water absorption and frost resistance.

Hyper pressed stone is produced in standard sizes 250x120x65 mm, and the weight of one full-bodied product is 4.2 kg.

Hyper pressing is an unburned production method in which limestone and cement are mixed, diluted with water and mixed well after adding the dye. The method of semi-dry pressing involves the use of a very small amount of water, whose share does not exceed 10% of the total raw material. Then, bricks of hollow or corpulent execution are formed from the resulting mass and are sent under a 300-ton hyperpress. Indicators of pressure while reaching 25 MPa.

Next, the tray with blanks is placed in the steaming chamber, where, at a temperature of 70 degrees, the products are kept for 8-10 hours. At the steaming stage, the cement manages to collect the moisture it needs and the brick acquires up to 70% of its grade strength. The remaining 30% of the product get within a month after manufacture, after which they become fully ready for use. However, you can transport and store bricks immediately, without waiting for the products to gain the necessary strength.

The dry-pressed brick does not have a cement film after manufacturing, due to which it possesses much higher adhesion properties than concrete. The absence of a film increases the ability of the material to self-ventilation and allows the walls to breathe.In addition, the products are distinguished by a smooth surface and regular geometric shapes. This greatly facilitates the work of masons and allows you to make masonry more accurate. At the moment, a single standard for hyperpressed brick has not been developed. The material is produced according to the standards indicated in GOST 6133-99 and 53-2007, which regulate only the size and shape of products.

High consumer demand for dry pressed concrete bricks due to a number of indisputable advantages of this material.

The disadvantages of hyperpressed bricks include a large weight of material. It obliges to measure the maximum permissible load on the foundation with a mass of brickwork. In addition, the stone is prone to moderate deformation due to thermal expansion of the material, and over time it may begin to swell and crack. At the same time, the masonry is loosened and it becomes possible to draw a brick out of it. As for cracks, they can reach a width of 5 mm and change it during the day. So, as the facade cools down, the cracks noticeably increase, and when it is heated it decreases.Such mobility of brickwork can cause a lot of problems with the walls, as well as with wickets and gates, built of solid brick. Among the minuses note the tendency of the material to burnout, as well as the high cost of products, reaching 33 rubles for a brick.

The classification of a hyper-pressed brick occurs on several grounds, the main of which is the functional purpose of the material. According to this criterion, there are three categories of stone: ordinary, facing and figured (shaped). 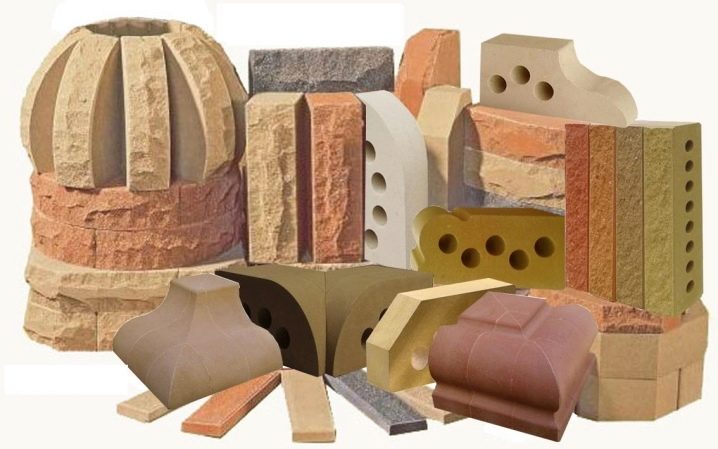 Among ordinary models emit corpulent and hollow products. The former are distinguished by the absence of internal cavities, high weight and high thermal conductivity. For the construction of housing such material is not suitable, but in the construction of arches, columns and other small architectural forms used very often. Hollow models weigh on average 30% less than their full-bodied counterparts and are characterized by low thermal conductivity and more moderate temperature distortion. Such models can be used for the construction of load-bearing walls of houses, but because of their high cost, they are used for these purposes less frequently.

An interesting variant of the hyperpressed hollow brick is the “Lego” model, which has 2 through holes with a diameter of 75 mm each. The brick got its name due to the visual similarity with the children's designer, in which the vertical holes serve to connect the elements. When laying such a stone, in principle, it is impossible to get off and break the order. This allows even inexperienced masters to perform perfectly flat masonry.

Facing brick is available in a very wide range. In addition to the smooth models, there are interesting options that imitate natural or wild stone. And if with the first everything is more or less clear, then the second ones are called a torn or crushed stone and look very unusual. The surface of such products has numerous chips and is speckled with a network of small cracks and potholes. This makes the material very similar to ancient building stones, and the houses built from it are almost indistinguishable from ancient medieval castles.

Shaped models are hyper-pressed products of non-standard forms and are used for the construction and decoration of curvilinear architectural structures.

Another criterion for brick classification is its size. Hyper-pressed models are available in three traditional sizes. The length and height of products are 250 and 65 mm, respectively, and their width may vary. For standard bricks, it is 120 mm, for lobster bricks - 85, and for narrow ones - 60 mm.

Hyperpressed models are ideal material for creating complex relief surfaces and can be subjected to any kind of mechanical processing. The stone is considered a real boon for designers and allows them to implement the most courageous decisions. However, its use should follow a number of recommendations. Thus, during the construction of fences and facades, it is necessary to reinforce masonry with a galvanized grid with small cells. In addition, it is desirable to form gaps for thermal expansion, having them every 2 cm. In general, it is not recommended to use full-bodied, hyperpressed brick for the construction of load-bearing walls of residential buildings. For these purposes, it is allowed to use only hollow ordinary models. 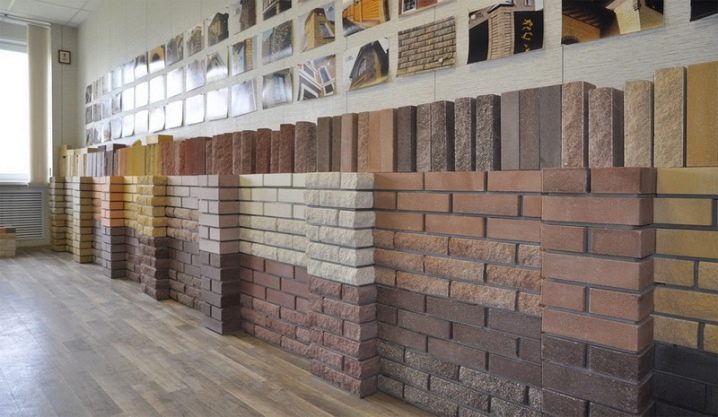 When a building is already constructed, whitish spots and stains, which are called efflorescence, are often formed during its operation. The reason for their appearance is the passage through the pores of the stone of water contained in the cement mortar, during which salt is deposited on the inside of the brick. Further, they salt salt to the surface and crystallize. This, in turn, greatly spoils the appearance of the masonry and the overall appearance of the structure.

To prevent or minimize the appearance of efflorescence, it is recommended to use cement of the M400 brand, the percentage of soluble salts in which is very low. Mix the solution as thick as possible and try not to smear it on the face of the stone. In addition, it is undesirable to engage in construction in the rain, and after the end of each stage of work it is necessary to cover the masonry with a tarpaulin. Preventing the appearance of efflorescence will also be helped by covering the facade with water-repellent solutions and the speediest equipment of the constructed building with a drain system. 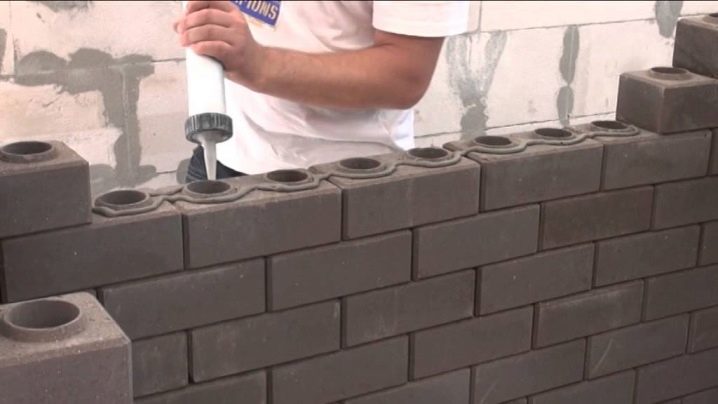 If the efflorescence still appeared, it is necessary to mix 2 tbsp. spoon 9% vinegar with a liter of water and process whitish stains. Vinegar can be replaced with a solution of ammonia or 5% hydrochloric acid. Good results are obtained by the treatment of walls by means of "Facade-2" and "Tiprom OF".The consumption of the first drug will be half a liter per m2 of surface, and the second - 250 ml. If it is not possible to make the processing of the facade, then you should be patient and wait a couple of years: during this time, the rain will wash away all whiteness and return the original appearance to the building. 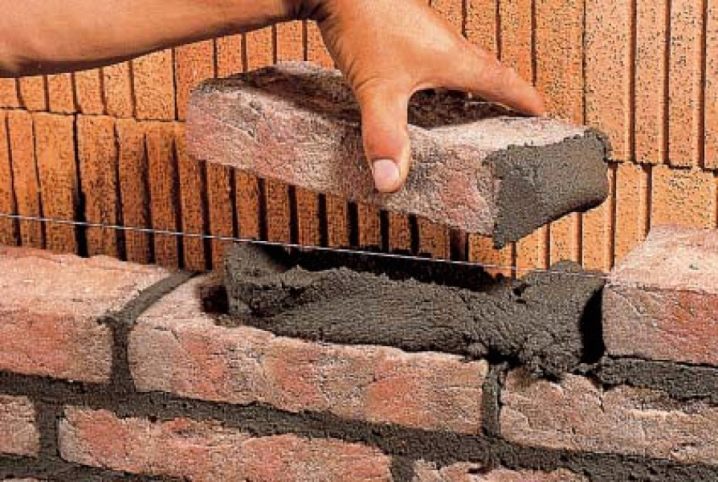 Relying on the professional opinion of the builders, the hyper-pressed brick shows excellent adhesion strength with cement mortar, which exceeds that of ceramic bricks by 50-70%. In addition, the index of the intralayer density of the masonry of concrete products is 1.7 times higher than the same values ​​of ceramic products. The same situation with layered strength, it is also higher in hyperpressed bricks. There is also a high decorative component of the material. Houses lined with hyperpressed stone look very dignified and rich. Attention is also drawn to the increased resistance of the material to the effects of low temperatures and high humidity, which is explained by the low water absorption of the products and excellent frost resistance. 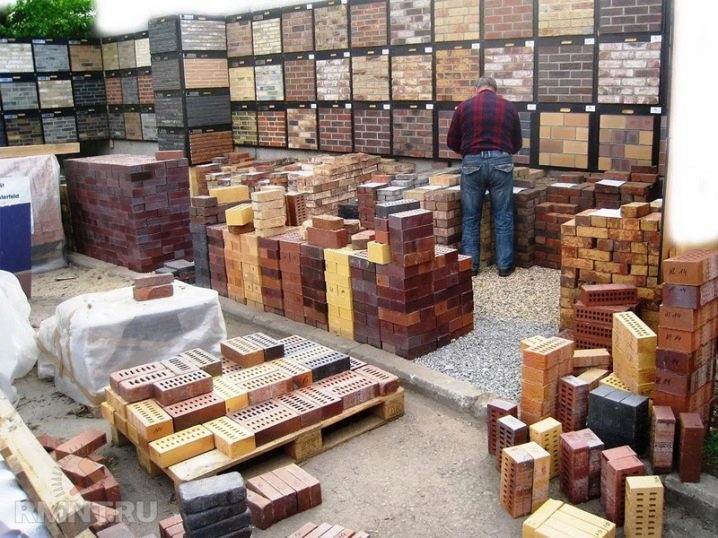 Thus, hyperpressed models benefit by several indicators from other types of material and, with the right choice and proper installation, are able to provide a solid and durable clutch.

How to lay hyperpressed bricks, see the next video.

Ground brick: how to choose and lay out?

Characteristics and use of black brick

What should be ceramic bricks according to GOST?

The weight of red bricks and how to measure it

Characteristics and application of brick M200