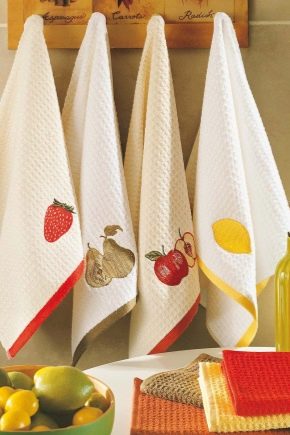 Virtually no work in the kitchen is possible without the use of towels. The fabric is used for drying dishes, wiping hands, grinding the hob or even processing vegetables. In addition, properly selected towels allow you to give the kitchen completeness and not only help in the household, but also please with the appearance. 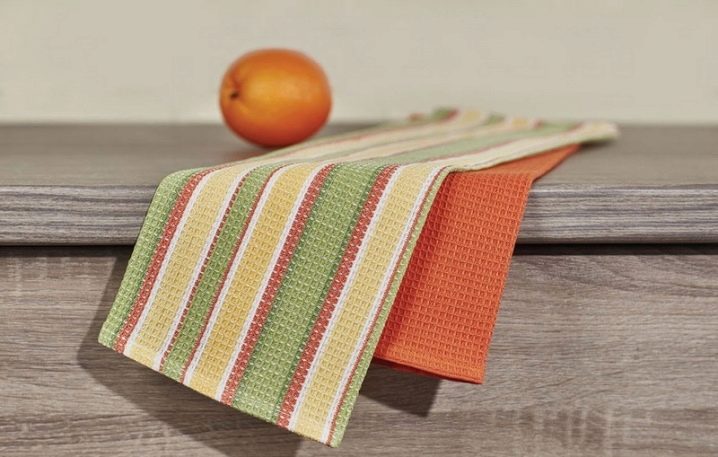 The set of kitchen towels can contain from one towel to three and more. One towel is suitable in the situation when the dishes are washed and dried in the dishwasher, and therefore does not require additional drying.In this case, a single cloth is used to wipe clean hands. Most often, housewives use two products - one for hands, and the second - for dishes. However, a set of three or more copies has much more possibilities for use.

For example, you can select a separate cloth for clean hands and fruits, and two napkins for dishes: on the first are placed wet plates, and the second they are wiped. A microfiber flap will also be useful - with its help, it will be possible to bring the knives, the surface of a glass-ceramic plate and steel dishes into perfect condition. If there are children in the house, then it is better for them to prepare a separate towel. In addition, a “rag for dirty work” and a wipe for wiping after a damp rag will be useful.

The main requirement for kitchen towels is that they are of high quality, soak up all the liquid and ideally do not leave villi. For many hostesses it is also important that they also fit the interior.

As a rule, two types of towels are chosen for the kitchen. The first - terry - are used to wipe hands.For dishes, napkins based on cotton and linen are suitable. They can also be waffles made from 100% cotton. In the case when the easy washability of textiles is important, terry towels with low pile are preferable. Usually they are decorated with inserts from another material, applique or embroidery. Cotton and linen towels always look bright and attractive, besides they can be ennobled with laces and edging ribbons. Wafer napkins, in turn, have good hygroscopicity.

Cotton towels will serve for a long time, qualitatively absorbing moisture and not causing harm to human health. Linen products may turn out to be too rough to the touch, but some people, on the contrary, consider this a plus - a kind of massage takes place from contact with them. Flax absorbs liquid qualitatively. Velor is not particularly recommended for the kitchen, as its absorbing properties are very mediocre. Terry towels dry for a long time, but they are pleasant to the touch. Recently, bamboo towels have become popular.They perfectly collect moisture, are not “soaked” with foreign odors, and are also not exposed to mold or mildew.

The form of kitchen napkins can be any. Of course, rectangles are considered classic, but a round or oval towel looks very original. The main criterion in this matter is convenience, so if the hostess does not find it difficult to wipe objects with rounded fragments, then she may well make such an original choice.

Best in the kitchen look plain towels with embroidery. In that case, if the choice is made in favor of colorful textiles with numerous images, then they must necessarily “overlap” with the interior details.

Although beautiful towels, as a rule, are selected depending on the existing interior and color scheme, many hostesses prefer to buy original napkins depending on the season.For example, in winter the festive New Year decor dominates, in the spring flowers “bloom” on towels, and in summer and autumn embroidery with a crop and colorful leaves becomes relevant. It is important not to forget about the loops, which can be made of laces, ribbons, buttons and other materials. As a rule, almost every holiday in the family has a new gift textile set, but if it is not combined with a kitchen design, you should not “force” yourself - it is better to give it to someone else.

Disposable wipes will be useful in the kitchen in many cases. For example, with their help it will turn out to get wet raw fish, poultry or meat before further processing, or, for example, soaking in marinade. Towels are indispensable and when you need to remove excess fat. For example, this happens when cooking pancakes, pancakes, cheesecakes or meatballs. Finally, paper napkins will be useful for some dirty actions: remove the remnants of food from the sink, blot the drops on a plate before serving, pick up a fallen piece of food from the floor, or simply wipe soiled hands. Storage of such towels is convenient with a special holder.

A large number of companies produce kitchen textiles, and the brands can be both Russian and established in Turkey. Of the well-known manufacturers deserves attention the company Oriflame, representing the line of goods "White Gold" with unobtrusive sparkling prints and a rich base tint. Other famous brands of towels include Tac, "Vasilisa", Mona Liza, "Romance", "Fidget", "Favorite Home" and others. By the way, any manufacturers should pay attention to the towels "Week". They are a set of seven napkins for each day of the week. Using the "Week" will be able to accustom themselves to kitchen hygiene and regular change of towels.

Even a novice hostess can sew a towel with her own hands. All that is needed is cloth, scissors, a sewing machine, threads and a needle. By choosing a linen or wafer base, it will be possible to realize any fantasy ideas with the help of colored threads. By the way, it is not necessary to purchase new fabric. Fragments of old clothes, for example, a print dress, are quite suitable for this business.

Sewing a simple towel begins with the fact that a rectangle with a length of 62 centimeters and a width of 32 centimeters is cut out of the fabric, where a couple of centimeters will go to the folds. In addition, about 5 millimeters of the edge can be ironed down with an iron to align the edge. Bends are fixed with pins, and the edges are processed on a sewing machine. In addition, the edges are overlaid with a zigzag.

It is most convenient to keep clean towels near the sink in order to be able to wipe and immediately dry your hands or the dishes themselves. If a separate towel is used for the plates, you will have to place them in different places. For example, special rails attached to the doors of cabinets, or somewhere close, are suitable for storage. Hanging napkins can be on a variety of hooks. They can be ordinary, mounted on nails, self-adhesive or rings placed on the handles of cabinets. 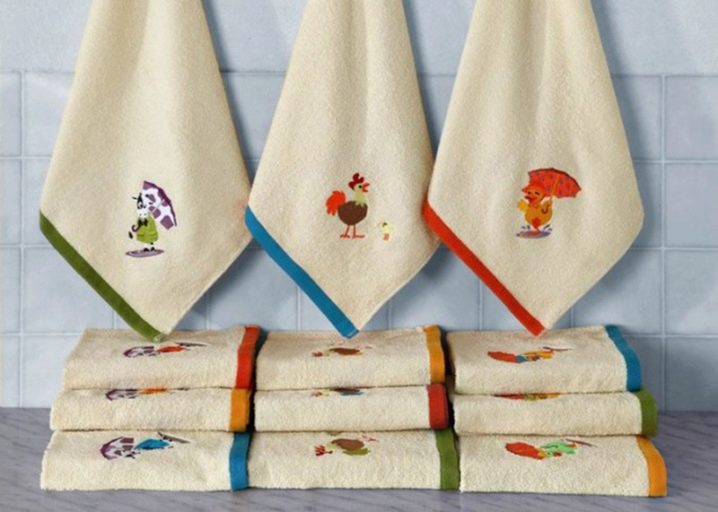 It is convenient to hang towels and on the horizontal handle of the oven, however, as a rule, you will have to walk for a long time until the sink. There are special holders for the kitchen. Inside the locker it is better to remove the microfibre shreds, as well as the "undressed" working napkins. 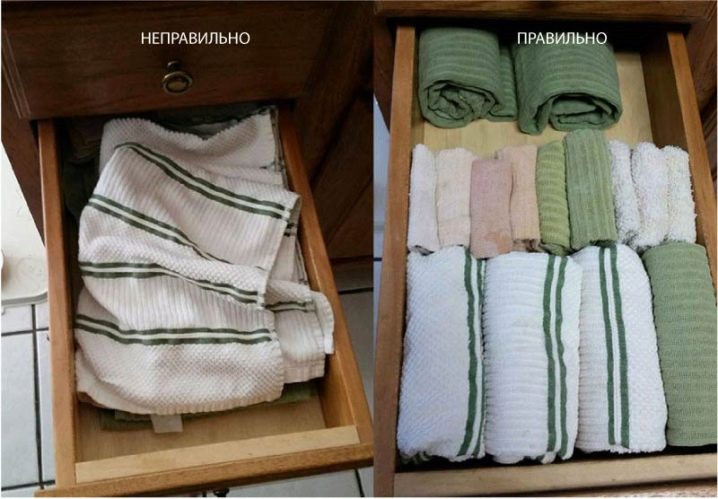 It is worth starting with the fact that it is recommended to wash kitchen towels separately from other things and even towels from the bathroom. The fact is that constantly absorbing liquid, the fabric accumulates a variety of microbes and bacteria, which can not cope with a delicate mode of washing, suitable, for example, for sheets. In the most favorable situation, kitchen towels are changed every three days, although this figure depends on the frequency of use and the number of people using the kitchen. The need for change is determined depending on the flavor - the smell of dirty fabric appears before an unpleasant appearance. 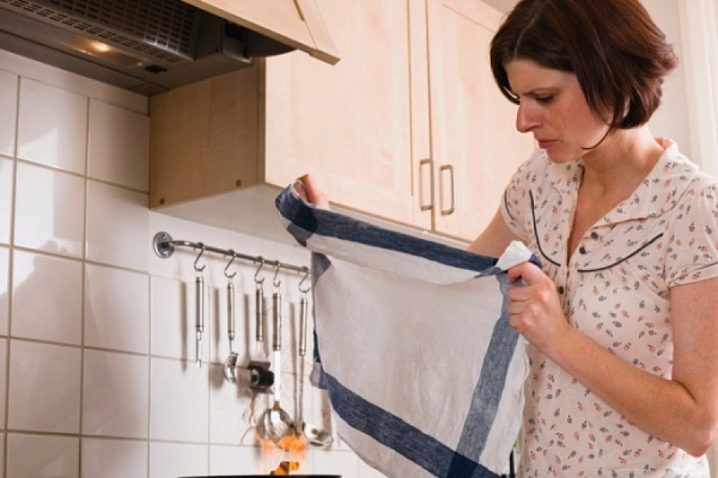 They are washed using ordinary powder at a temperature of 60 to 90 degrees, depending on the color of the fabric. Strong contamination can be pre-soaked in bleach or in a solution of soap and soda. From home recipes, steeping towels in 20 grams of salt dissolved in a liter of cold water is considered the most effective.

Grease stains from sunflower oil are washed with ordinary dishwashing solution before washing. It is most convenient to do this in the evening, and in the morning to wash towels in the usual way.In addition, pollution should try to treat 72% of soap and leave for about four hours. In the case when the kitchen napkins previously decided to soak, you can add vinegar to the water. The proportion will be as follows: twenty grams of product per couple liters of water. In an extreme situation, it is allowed to use the water line cleaner, diluted in water. 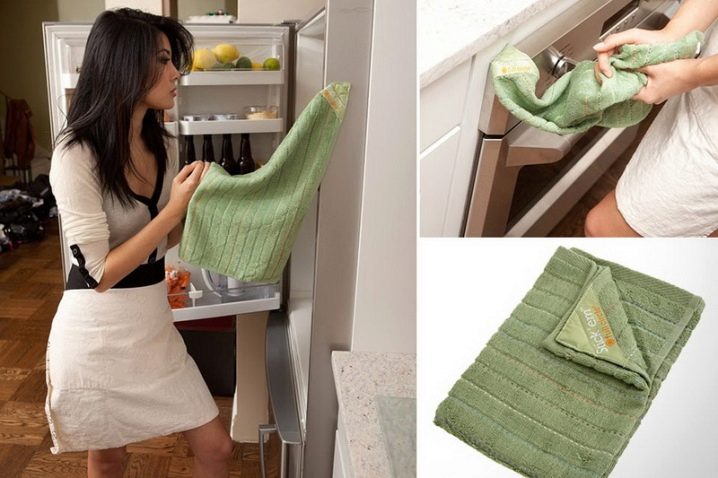 Housekeepers bleach towels with mustard porridge, applied to the stained surface. Sometimes a solution of manganese diluted in water intended for soaking also helps. With its help, by the way, it will be possible to destroy the stubborn aroma of the preparing food. Well copes with the task of hydrogen peroxide added to water. In addition to disinfection, it provides a successful fight against mold. 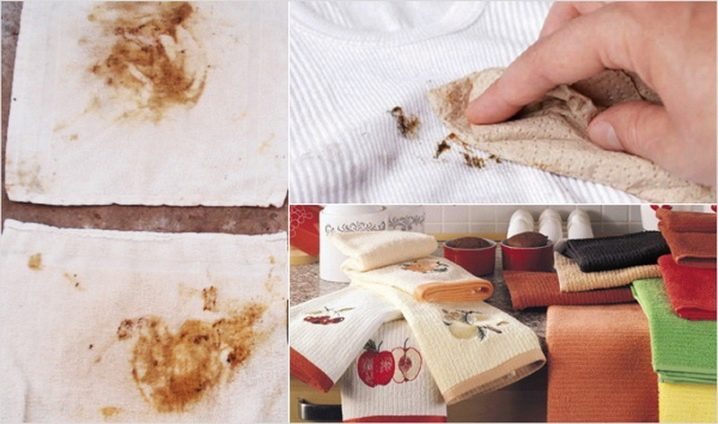 It is recommended to boil white-colored kitchen napkins. Water is poured into a large pot. As soon as it begins to boil, you can add 40 grams of bleach, 40 grams of vegetable oil and 180 grams of laundry detergent. The liquid is thoroughly mixed and towels are placed in it.After boiling for ten minutes, you can turn off the fire, leaving the lid closed. This technique is extremely effective, but, unfortunately, it is not suitable for towels made of synthetics. 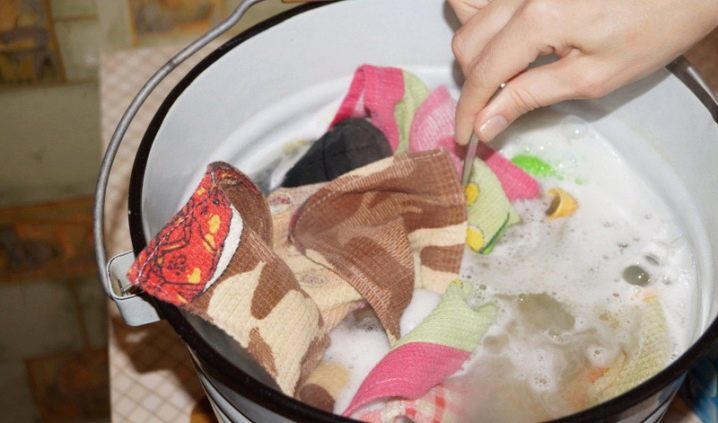 How to wash your own kitchen towels, see the next video.

How to make a bear from a towel?

How beautiful to fold a towel?
Information provided for reference purposes. For construction issues, always consult a specialist.