Characteristics of check valves for ventilation and features of their installation 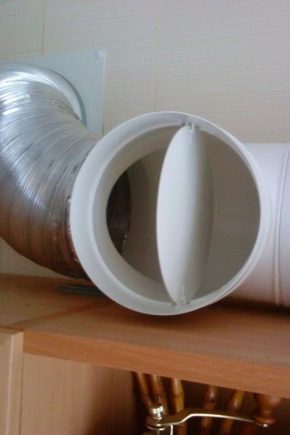 The check valve for ventilation is an important element of the ventilation system and is widely used in installations of exhaust and supply and exhaust type. The use of the device reliably protects the room from extraneous odors and makes your stay in it pleasant and comfortable. 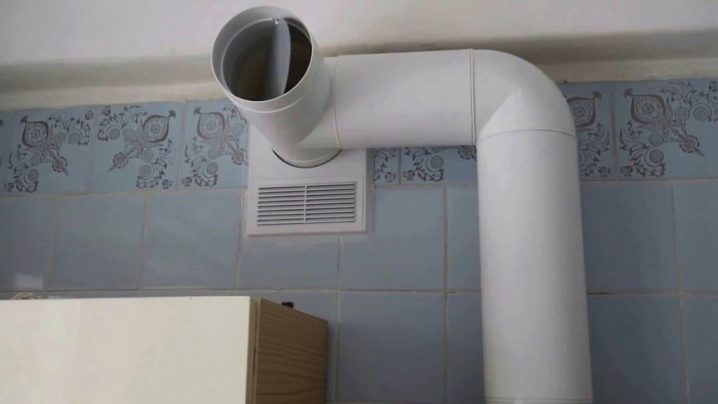 Why does reverse thrust arise?

The principle of operation of the supply and exhaust systems is based on the equality of incoming and outgoing air volumes. In the case of a decrease in the number of incoming air masses, there is an effect of overturning the thrust, as a result of which the air from the exhaust ventilation duct comes back into the room.The reason for the disturbance of the circulation of the flows is often the clogged openings of the inlet ventilation, the installation of plastic windows, as well as the breakage or wear of the mechanisms responsible for the intensity of the inflow.

However, it may be the other way around when the intensified outflow of air masses acts as a cause, which often occurs when smoke and combustion products exit through the chimney pipes of stoves and fireplaces. If the chimney is in good condition, the hot mixture comes out very intensively, and the intake system can not cope. As a result, there is an overrun of thrust in the exhaust duct, and the exhaust air rushes in the opposite direction.

Also, the reverse thrust effect occurs when several branches of the duct are connected to a common ventilation duct. In this case, an uneven pressure is often formed, which leads to the reverse absorption of the flows. There are frequent cases of joining several points of the fence to one duct, one of which is equipped with forced exhaust.

As a result of the fan operation, air pressure is generated not only in the direction of the ventilation channel going outside, but also towards the other points of the fence, which are not equipped with exhaust forced devices.This effect is often observed in old houses with common air ducts, when one of the neighbors installs a powerful hood. As a result, polluted air from the common channel is intensively driven into rooms that are not equipped with such devices.

Another reason for the emergence of reverse thrust may be a change in environmental conditions. For example, in violation of the relief through the demolition or construction of nearby buildings, the wind can change its direction and begin to blow into the exhaust channel. Thus, whatever the cause of the overturned thrust, at the first signs of its occurrence it is necessary to equip the system with a check valve capable of neutralizing all the negative aspects of this effect.

What is it and what is it for?

A check valve is a device installed at the outlet of the duct, and consisting of a housing and a valve. The housing, in turn, is equipped with a decorative grille covering the internal parts and fixing elements of the structure. The valve has the ability to open under the pressure of the outgoing air and to return to its original position whenno flow. 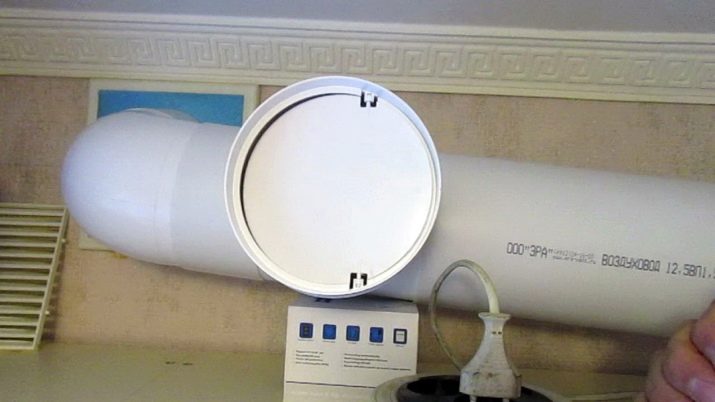 Check valves are available in standard sizes and are compatible with all types of air ducts. The material for the manufacture of devices is mainly plastic. There are also metal models, but their scope is often limited by the humidity indicators of a particular room. Although galvanized and chrome-plated products have a corrosion-resistant coating and along with plastic can be used in bathrooms, showers and kitchens.

The principle of the check valve operation is as follows: polluted air leaves the room and, getting through the pad into the device body, presses the flap and opens it. As soon as the pressure of the outflow falls, the damper closes and begins to serve as a solid barrier to dust, foreign smell and small insects. In addition, the use of even the simplest flap valve significantly reduces the level of external noise coming from an adjacent room or from the street. The device is mounted on the inner or outer end of the duct, and when installed on systems with forced air circulation - behind the fan. 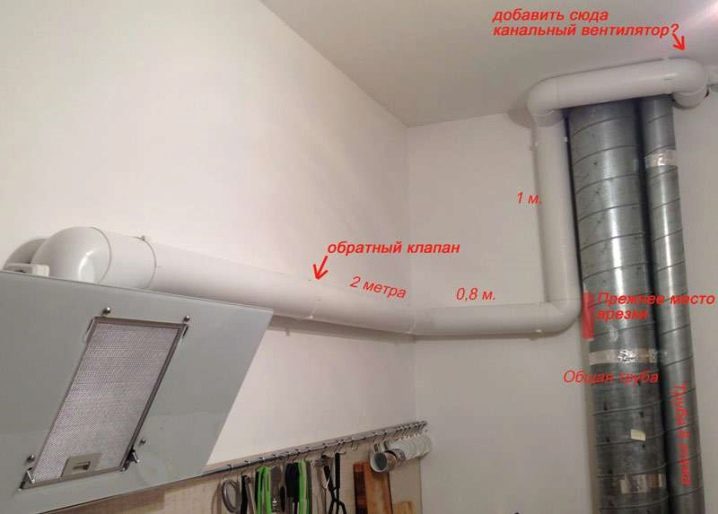 The modern market of ventilation equipment represents four types of check valves, each of which has its own design features, as well as strengths and weaknesses.

Single door models are available in two versions. The first type is represented by products with the position of the axis on which the bar rests, displaced relative to the center of the section, and the second is characterized by the presence of a counterweight inside or outside the device. The advantage of this type is the ability to install on systems that are not equipped with forced exhaust, and the disadvantages include the need to fix the device in a strictly vertical or horizontal position. Otherwise, the counterweight will sink, and greater efforts will be required to open the valve.

Diaphragm-type valves are particularly sensitive structures and are able to open at the slightest air movement. In the role of the valve in them serves a thin membrane, for the opening of which requires very little effort. Membrane models are designed for installation in exhaust ventilation with a natural bent and when installed in systems with forced circulation require the installation of additional stiffeners.Otherwise, the thin membrane is quickly deformed from the impact of strong traction and, due to a loose fit, will start to leak air.

The next criterion for the classification of devices is the material from which they are made. On this basis, there are two groups of devices: plastic and steel.

Another important feature by which anti-return valves differ is the control method. According to this criterion, models are divided into manual and electric. Adjustment of the first is made with the help of a lever or a valve, while the latter are equipped with an electric drive and require a nearby source of electrical power.

The shape of the valves also varies. The devices are available in round and rectangular design, which makes it easy to combine them with any type of duct.

In addition, check valves are distinguished by the method of installation - the devices can be mounted both in the vertical and horizontal planes, as well as in terms of throughput, which shows how much air is able to pass the device per unit of time. Devices differ in safety class. Along with domestic and industrial models, there are explosion-proof or intrinsically safe valves. Such products are intended for ventilation systems of explosive zones of class B1, B1A and B1B, in which the movement of explosive mixtures is assumed.The devices are capable of withstanding a pressure of 1500 Pa at a speed of movement of the stream reaching 6-20 m / s. 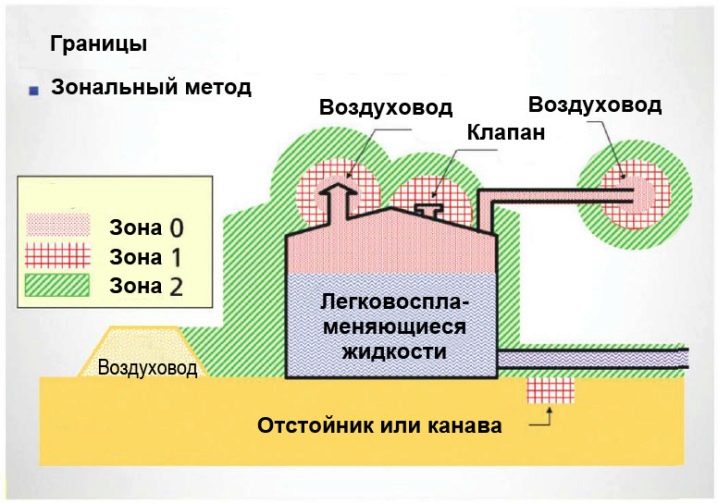 How to do it yourself?

The modern market of exhaust and ventilation equipment offers a huge selection of inexpensive valves, so independent production of the device is justified only in the case when the ventilation grille or fan duct has non-standard shape and size. In such cases, it is faster and more profitable to make the device with your own hands, rather than spend the effort and money to make adapters. The simplest for self-execution device is a single-leaf flap valve, where a rigid plate made of plastic or thin metal, a sheet of cardboard or polyester film is used as a flap. 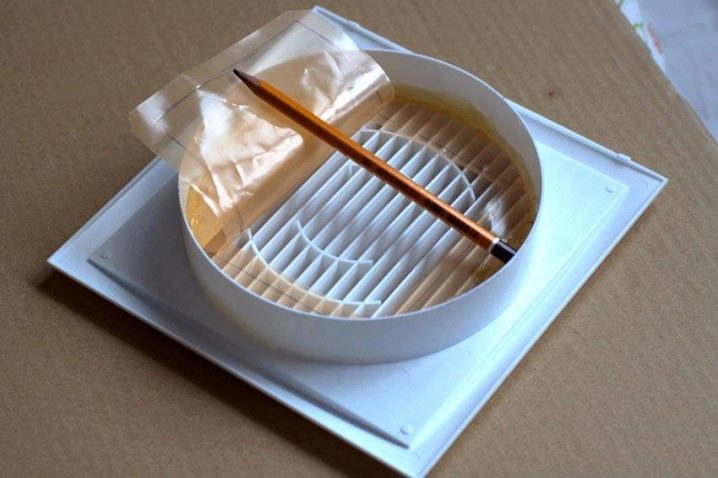 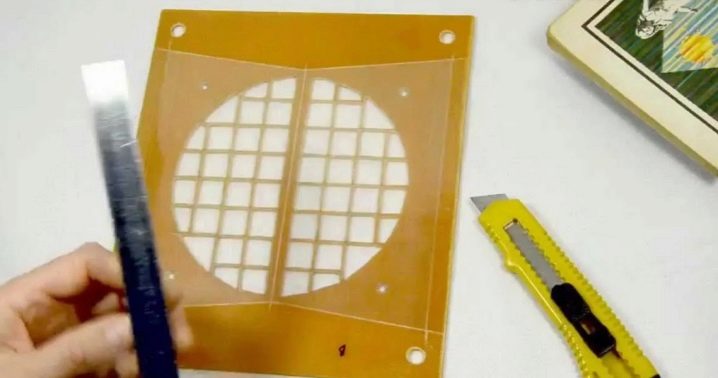 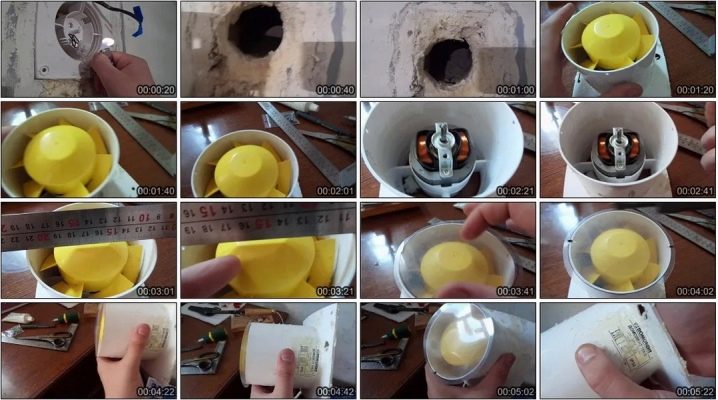 There is a simpler way. To do this, the sash of the film is glued directly to the back side of the ventilation grill. However, with this design, the fixing of the film to the lateral sides of the plastic lattice is carried out with the help of adhesive tape, which over time can lose its properties and come off. Therefore, gluing the shutters to the cardboard surface is the preferred option. 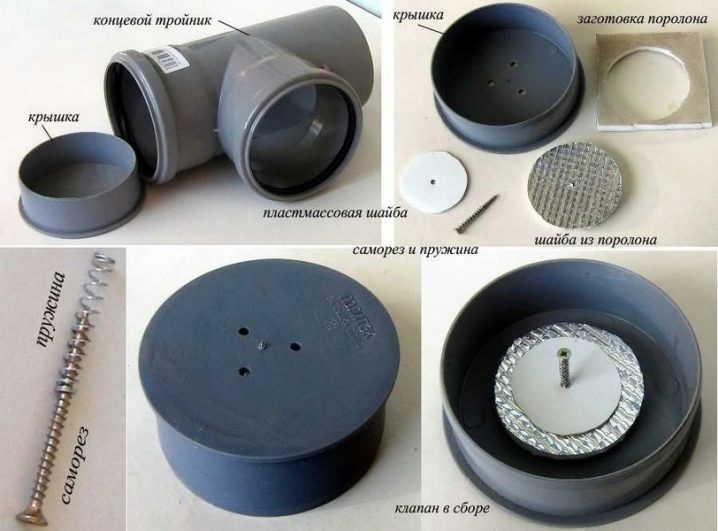 How is the installation?

In order to equip the wall ventilation outlet with a non-return valve, it is necessary to provide that the effect of the overturned draft does not occur with any combination of the bathroom’s bathroom, bathroom and kitchen pull-out devices.Therefore, if a tee is installed in the ventilation system, which collects air from all points of the intake and leads it into a common duct, all outlets should be equipped with valves. 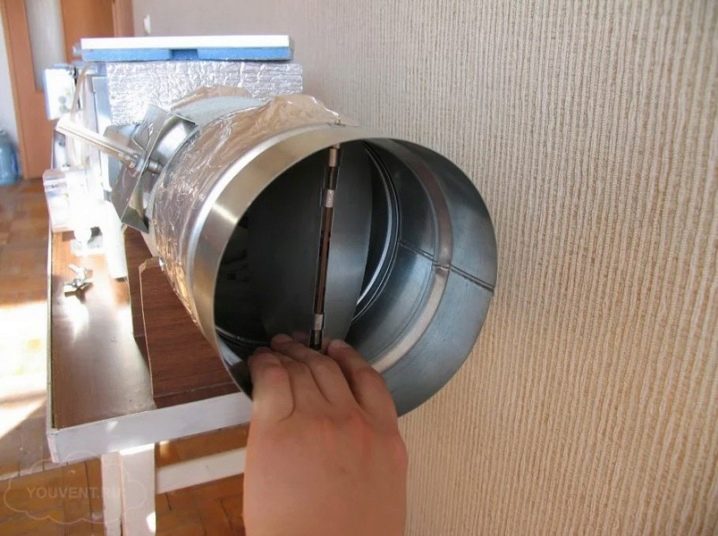 An important condition for placing check valves is to provide free access to them. This requirement is dictated by the need to regularly clean the devices from adhering grease and dust. If the devices are rarely cleaned or not cleaned at all from dirt, then due to the adhered deposits, the valves will no longer fit tightly to the valve, and the device will become ineffective.

Installation of a check valve is made at the outlet of the ventilation duct using liquid nails or self-tapping screws. The second option is much more preferable from a practical point of view: if you need to clean the device, you can easily unscrew it, and after processing it is also easy to put it in place. When fixing the valve, it is necessary to check that the device completely blocks the duct opening. 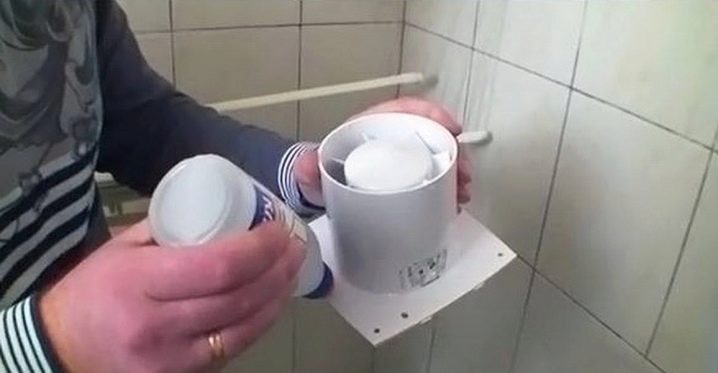 When installing valves on systems with forced removal of polluted air, the device is placed in the ventilation duct behind the fan. 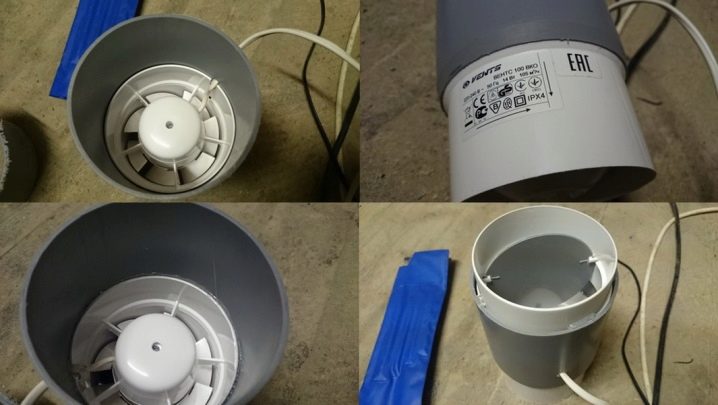 The installation of external louver-type valves is performed on the same principle. The only conditions for the selection of such devices are the material of manufacture and the presence of additional functions. These include anti-vandal devices that prevent damage or damage to the blinds, as well as the presence of heat recovery function.The latter option is especially important for outdoor models: it prevents valve icing and contributes to its proper operation during the winter period. 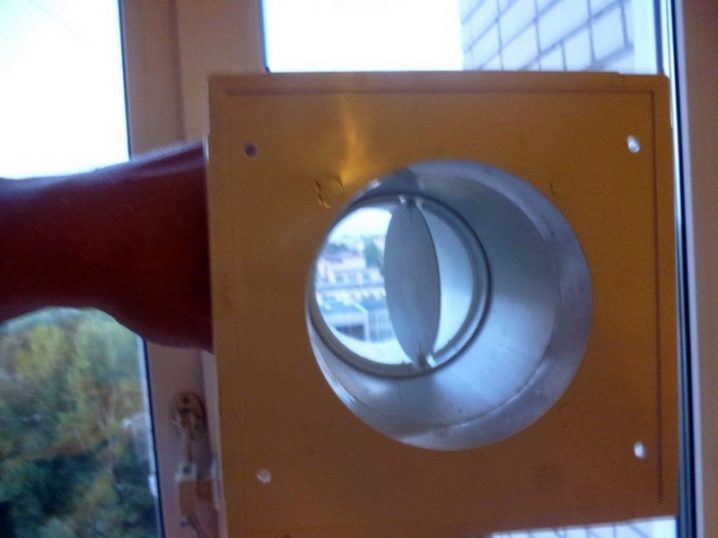 The correct choice, competent installation and timely service of the check valve contribute to the effective protection of the apartment from unpleasant odors, extraneous noise and dust. This allows to significantly improve the air quality in the room and leads to the creation of a comfortable microclimate inside it.

How to make a check valve with your own hands, see the next video.

Forced ventilation in a private house: device and installation

Design and installation of ventilation ducts

Ventilation features in an apartment building

Air ventilation with air heating: features of the device and installation of the system

The process and subtleties of ventilation certification

Features and ventilation device in a wooden house

Purpose and principle of operation of general ventilation

Ventilation in the apartment: the subtleties of the system and the rules of its organization
Information provided for reference purposes. For construction issues, always consult a specialist.